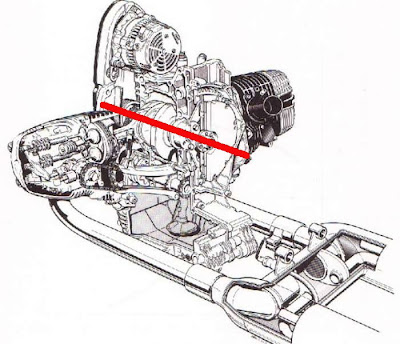 Why did BMW move to a straight six? Let's review the history of BMW. Going back to the beginning, BMW was at first famous for producing an air-cooled, shaft drive, boxer twin, which by the way it still does. This configuration proved to be ideal for long distance travelling, because the cylinders were both stuck out horizontally in the air flow, and the bike could run all day at high speed without overheating. And incidentally, this boxer BMW engine had a longitudinal crank.

To understand these design issues, it is helpful to know that 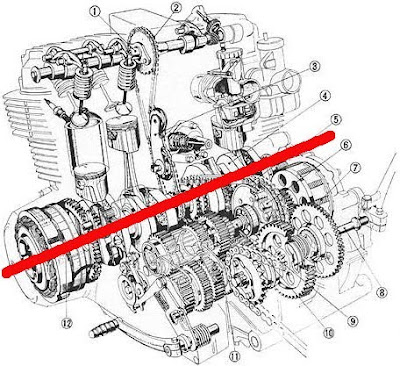 there are two ways of aligning the crankshaft in a motorcycle, transverse and longitudinal. Transverse crankshafts are across the frame, and work best with a sprocket and chain or belt. Longitudinal cranks are in line with the wheels and work best with a shaft drive. Otherwise complicated gears are needed to turn the drive shaft 90 degrees. Now you know what a longitudinal crank and a transverse crank is. OK lesson over!

BMW stuck to this simple, effective layout for many years, even after the new Honda CB750 four cylinder bike began to take over the long distance touring market. But the Honda was still an inline four, air cooled, and chain drive. The BMW had the advantage in cooling and in the final drive system.

Then in 1976, Honda made a direct challenge to BMW, and upped the ante on touring bikes. They put out a boxer engine with four cylinders, and shaft drive. It also was water cooled. So now Honda had trumped BMW with doubling the cylinders, the same type of rear drive, and a superior cooling system. The sad part for BMW was, that the Gold Wing engine layout was the one everybody thought would be the next step forward for BMW. Now Honda had it first, and if BMW copied it, everyone would accuse BMW of lack of originality.

BMW decided they needed to respond to the Gold Wing anyway. It took a few years, until about 1984, to come out with a new bike that finally broke the BMW mold. When they did, it was a liquid-cooled model, four cylinders and of course shaft drive. The way that BMW moved ahead of Honda's Gold wing was in reducing the weight, and narrowing the engine for better lean angles, both of which made it a sportier machine. How did they do that? First, by putting all four cylinders on the left, and moving the crank to the right. The original layout resulted in an engine that was a flat block, and was nicknamed the flying brick. And secondly, to reduce the weight, the engine and single-sided swingarm were used as the centre of the frame, in other words they eliminated the traditional frame. The only framework left was a stub to mount the steering head on, and the seat and gas tank. The overall weight was much lower than the Gold Wing, with better ground clearance for cornering.

The flying brick layout was much better than the now obsolete boxer layout, but BMW ran into two problems, from different directions. First problem was the howls of protest from the loyal BMW fans, who had developed a liking for the boxer layout, reminiscent of the Harley owners liking for V-twins. This forced BMW to immediately begin developing a new boxer (without liquid cooling - that was part of the protest). And meanwhile, Honda was using its considerable resources to move ahead so far that BMW would never again be competitive. In 1981, Honda had already come out with a second touring bike, lighter than the Gold Wing, with an air cooled transverse inline six. That was the CBX with fairing and saddlebags. Then in 1988, Honda upscaled the Gold Wing from 1200cc to 1500cc, and added two more cylinders to made it a boxer six. A mere two years later, Honda came out with an even more direct challenge with the ST1100, a sport touring bike to compete directly against the BMW flying brick. Although the ST1100 was still a bit heavier, and only four cylinders, it gained cornering clearance by tilting the cylinders up in the form of a V-4. From then on BMW seemed to have been left permanently behind Honda in the touring market.

BMW pulled a huge suprise in 2005, and copied the original Honda layout, with a transverse four cylinder bike. Back in 1976 Honda had jumped into the longitudinal crank engines to compete with BMW, and in 2005 BMW jumped on the transverse crank layout to fight back. Ironically, this transverse four engine layout is so closely identified with Japanese bikes, it is called the UJM engine (stands for Universal Japanese Motorcycle). So BMW after so many years of original designs, decided to F*** originality and build a UJM bike and try to outdo the Japanese in their strongest home turf, the high powered sport bikes.

The BMW transverse four was soon powering a luxury sport touring bike, the K1200GT, and was then upped to the K1300GT. The flying brick engine was almost phased out within a few years.

In November 2009, BMW announced they were were going to up the K1300 engine to six cylinders.

So now, Honda has copied the longitudinal crank boxer engines off BMW, and BMW has copied the transverse crank inline fours and sixes off Honda. Perfect symmetry.

Pictures: The original layouts, the BMW boxer twin, with the longitudinal crank axis in red (parallel to the length of the bike). Then the Honda four with the transverse crank axis in red, drawn from the same angle.
Copyright the Lost Motorcyclist