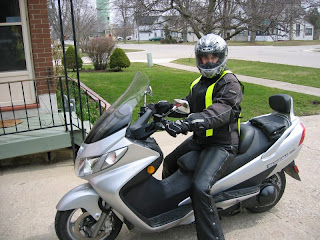 By The Lost Motorcyclist April 2011

On Sunday, we had the first high temperature of the year, 22c. On the same day we had the highest gas prices of the last two years at $1.28 per litre.

We were going to visit my mother that day, and with the weather and the gas prices, Mary Ann had the idea of taking her Suzuki Burgman. It would also be her first time driving the scooter in 2011, and at those gas prices, the Burgman could save us about seven dollars on the 300 km. round trip compared to the Toyota Matrix.

At 9:30 A.M., there was rain falling a few kilometers to the north of us, and it was only 8c. Also, we wanted to arrive back home at 9:30 P.M. which is after dark, and I usually avoid riding in the dark in April because of the freezing. But the detailed (hour by hour) weather report said it would still be above 15c at 9:30 P.M.

As I was packing our rain gear under the Burgman's seat, I could see raindrops hitting the driveway bricks. I told Mary Ann that we should get going, and according to the radar weather, we should try to drive south as far as we could to get out of the path of the rain. We didn't actually make it out of the city before it started raining enough to get our face shields wet. The road was still dry, but behind us the sky was dark, and we saw at least one lightning strike. It didn't help when Mary Ann made the wrong turn on one of our poorly marked roundabouts and we headed back north into the city. But then we got that sorted out, and soon after the skies brightened, and the rain stopped. We just made it out of Kitchener before a storm struck and covered the ground in hail. (we found out later). 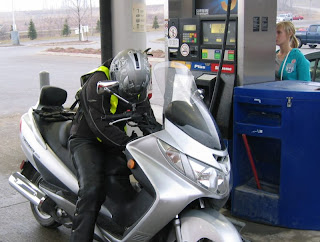 We stopped for our first fill up of gas that was only $1.24 per litre at a truck stop near the 401 at Woodstock. Once we were on the 401, the Burgman matched the speed of the big trucks, and we made it all the way to Dutton by noon.

The afternoon in Dutton was sunny, and it did get up to 22c, so it was actually almost too hot. We started the return trip just before 8 P.M. It felt a bit strange, putting all that warm heavy motorcycle clothing on, with the temperature still at 22c. Mary Ann headed right back down the 401 to the same Woodstock gas station and we filled up a second time with the "bargain" gas. Then we decided to take some back roads in the dark, and arrived home at about 9:30.

That was about the most comfortable I have ever felt as a passenger on the scooter. With my bladder stone removed, now I don't feel any pain on the bumps. Every year Mary Ann is better at balancing the scooter, and I am also learning how I can minimize the effect of my weight when we come to a stop. 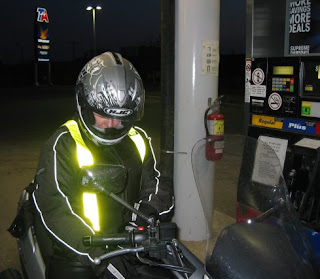 I still worry about the small rear tire, so every time we go on the freeway together, I make sure the rear pressure is 40 psi. Actually I suppose I should also check even with a big tire like the Vulcan's, but it never seems to need any adjustment.

The three pictures are: Mary Ann and the Burgman (in Dutton), the first fill up (Woodstock, daytime), and the last fill up (exact same place on the way back, night time) She is filling up the bike while sitting on it, because the filler cap is right between her feet.