Tigers and Pigs Living Together Does Not Disprove Darwin 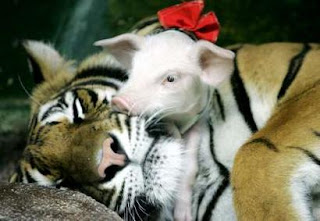 This is a public service for creationists, who want to give up the story of Adam and Eve as literal truth, but have a lot of trouble understanding evolution, because of all the misconceptions they have been fed.

For Born Again Christians who would like to become more integrated in mainstream western society, here is an explanation of why tiger cubs in a zoo being fed by a mother pig does not disprove evolution.

One of the supporting stories of the Born Again Christian creation story is that before the fall of Adam and Eve, none of the animals ate each other. Every creature was in harmony.

"The Bible teaches that the original diet of both humans and animals was vegetarian (Genesis 1:29–30). Thus there was no death of humans or vertebrate animals, which the Hebrew Bible calls nephesh chayyāh (נֶפֶשׁ חַיָּה). Plants and invertebrates are not described that way, so are not ‘living creatures’ in the same biblical sense. It was only the Fall of Adam that brought death and suffering into the world (Genesis 3:19, Romans 8:20–22) when God cursed the whole creation."

Darwin proposed his theory of evolution, which stated that animals had evolved their size, shape and most other characteristics, in order to better survive. In other words, every characteristic of an animal was in some way to help either get food, to avoid being food, or to reproduce efficiently. Most animals have very little that is not needed for survival. Almost everything is fine tuned for hunting or defence. This would tend to support the idea of evolution, rather than creation as a vegetarian creature.

However, there are cases in nature where animals help each other, or do not try to kill each other. And that has been taken as proof that before Adam and Eve wrecked everything, God actually intended for all these newly created animals to live together in vegetarian peace and harmony.

Darwin did not say that the strong must kill the weak. He said that the species would evolve according to which animals' young survived best. By the way, survival of the strongest was not Darwin's idea either, it is a simple observation that did not take a giant intellect to figure out.

A second example, two wolves help each other to hunt and kill a caribou, instead of one wolf trying to kill and eat the other wolf. Again, any wolves that have a stronger instinct to kill and eat each other than to join forces against a Caribou, will not survive very long. The big wolf, eating the smaller wolf, gets a meal but then may starve to death. So both wolves die, probably before even having any young. But two wolves teaming up will be able to hunt Caribou more successfully for the rest of their lives. So therefore wolves with an instinct to hunt together will survive better, and so will their young.

Now that the basics are understood, it should not be too hard to figure out that inter species cooperation sometimes can happen too, based on exactly the same principles. There are so many different cases, I could not explain them all, but anyone should be able to, once their creationist misunderstandings of "Darwinism" are cleared up.

"From this biblical framework, Christians can present a logical answer to any scoffer’s challenge. Any specific case is likely to fall into these general categories of explanation:2

(a) Those things that are now used as DAS (defence-attack structures) may not have been designed for this purpose, and had a different function before the Fall. They reached their present function by degeneration, e.g. mutations.

(b) The design information for DAS was already present before the Fall, perhaps in latent or masked form. God foreknew the Fall, so it’s likely that He preprogrammed creatures for the information needed to survive in a fallen world."

From the previous quote I would simply ignore point (a), once you know that (b) is "God foreknew the fall", and so built in all these defence and survival systems. To me, the explanation of God planning ahead for the fall is opening another door to a convincing case that God was not really too serious about the Garden of Eden. Apparently His anger at Adam and Eve, and His "cursing all creation" was not much more than acting with mock anger about something he knew would happen and had actually planned for.

So that's one more problem cleared up for Christians tired of arguing against scientists, and looking to be more integrated in modern society.