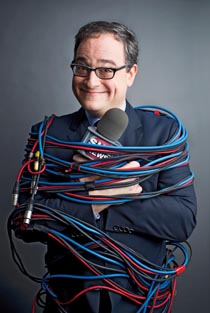 The only reason I read MacLean's is to distract me from the pain of a dentist visit.  So I was at the dentist .. again .. and the latest MacLean's was there, with an article about Ezra Levant. The perfect anesthetic before going to the dentist chair.

"Ezra Levant: Love him or hate him, he keeps winning" A profile of the right-wing gadfly who loves to offend by Jonathon Gatehouse on Saturday, January 12


I found one quote in the article particularly relevant, where Ezra Levant blamed the Jews for Canada's human rights laws and here it is:


"The people to blame for the “illiberal and un-Canadian” human rights laws and tribunals he’s been crusading against for the past seven years are well-represented in the theatre. 'It came from us. I mean the Jews, my friends.'"

Well well, apparently Ezra was asleep during History class, which is especially annoying to me, as an ex-History teacher.  So now I have to fill him in on what he missed.  Here goes.

It was just after WW2, when the Allies found concentration camps full of dead and starving Jews.  In the final tally, about 6 million Jews had been killed in what we called the "Holocaust".  The horrified allies tried to analyse what happened to result in this tragic outcome, and concluded at the time that it was years of anti-Jewish propaganda that had built to a fever pitch in the war, and had precipitated this great tragedy, and made it possible for it to happen.  I don't have the time or space to go into every cultural and sociological factor here, but that's what people in Canada, and the other allied countries generally thought back in the fifties.  So, because nobody wanted another world war, many things were done to try and avert the recurrence of such a situation.  Things like the establishment of the UN, the generous financial aid provided to the losers (Germany and Japan specifically), and the prevention of any further campaigns of propaganda against helpless minorities.  And this means not just Jews, but any minorities.  We did not want this to happen ever again, to anyone.  So every country tried to pass some kind of legislation to protect minorities from genocide, including Canada.  That's why we have the Canadian Human Rights Act.

So in a way, Ezra was right. It was because of the Jews that we have the Human Rights Act in Canada.  Ironically, he finds that it is very restrictive in his campaign to demonize Arabs in the way that Hitler demonized the Jews.  Well, sorry for your bad luck Ezra, but anyone who was awake during history class already knows that the Human rights stuff came about because of the Jews who died in the Holocaust, and was also supported after the war by Canadian Jews.

By the way, recent Right wing emails have tried to persuade us that it was not propaganda that enabled the holocaust.  The two main right wing theories regarding the origin of the holocaust are currently

It was gun control.  If the Jews had guns the holocaust would never have happened.  (FYI, France had guns, they surrendered.  Russia had guns, they lost 8 million people fighting the Nazi invasion, Britain had guns, they retreated to their island and got heavily bombed. The Jews in Warsaw had guns, but the Nazis simply leveled their ghetto with artillery and tanks.  I don't think this argument stands up to much scrutiny.)

It was Darwin's Theory of Evolution.  Apparently Hitler decided that Darwin's theory of evolution meant that he had to kill all the Jews before they became a new species or something.  Maybe I misunderstood that argument.  Anyhow it's quite weak, compared to the many hundreds of years of anti-Jewish religious hatred in Europe.  Here is a quote from Martin Luther, the German who started the protestant reformation. (not the black guy who was killed in the Civil Rights movement).

In 1543 Luther published On the Jews and Their Lies in which he says that the Jews are a "base, whoring people, that is, no people of God, and their boast of lineage, circumcision, and law must be accounted as filth."[13] They are full of the "devil's feces ... which they wallow in like swine."[14] The synagogue was a "defiled bride, yes, an incorrigible whore and an evil slut ..."[15] He argues that their synagogues and schools be set on fire, their prayer books destroyed, rabbis forbidden to preach, homes razed, and property and money confiscated. They should be shown no mercy or kindness,[16] afforded no legal protection,[17] and these "poisonous envenomed worms" should be drafted into forced labor or expelled for all time.[18] He also seems to advocate their murder, writing "[w]e are at fault in not slaying them".[19]


I don't think Charles Darwin said anything as bad as that.  Actually, some people think Darwin was a Jew.  That mistake has never been made with Luther. Or Hitler.