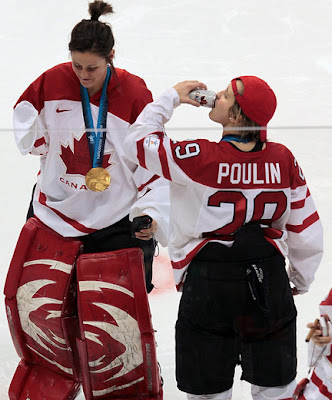 Last night I enjoyed the gold medal hockey game where the Canadian women won against the USA. And when I woke up this morning, the fun still seems to be going on, at least in the media.

ABC News has picked up on a post game slip-up by the Canadian team, that needed to be investigated by the IOC, and as a result of the investigation, Team Canada apologized. At the heart of the matter was Canadian player Marie-Philip Poulin, who scored both goals in this game, and was caught drinking a beer after the game. Be patient, I'm coming to the scandal as soon as I can, I'm almost there. Marie-Philip is only 18 years old, and as everyone in Canada knows, it is illegal to have a beer in British Columbia unless you are 19 years of age. Unfortunately for Marie Philip, British Columbia is the actual province that was hosting the Olympics. Not Alberta, not Quebec, where it would have been OK. To make matters worse, the Royal Canadian Mounted Police neglected their law-keeping duties, and did not tase Marie Philip, or drag her away in handcuffs, which, of course what should have happened according to the laws of our land.

"The players stormed back onto the ice half an hour after beating the United States 2-0 on Thursday and staged a raucous celebration — smoking cigars and swigging beer and bubbly.

Haley Irwin poured champagne into the mouth of Tessa Bonhomme, gold medals swinging from both their necks. Meghan Agosta and Marie-Philip Poulin posed with goofy grins.

Goalies Charline Labonte and Kim St-Pierre posed at center ice for Poulin, lying on their stomachs with a giant bottle of champagne resting just above the Olympic rings.

Poulin, who scored both goals for Canada, doesn't turn 19 — legal drinking age in British Columbia — until next month. The drinking age in Alberta, where the Canadian team trains, is 18. Photos showed Poulin on the ice with a beer in her hand.

Gilbert Felli, the IOC's executive director of the Olympic Games, said the antics were "not what we want to see."

"If they celebrate in the changing room, that's one thing," he said, "but not in public."

Let me translate from American to Canadian

"Smoking cigars"="They were smoking something that was not marijuana, a first for BC actually"

"actually tried to commandeer the ice-resurfacing machine"="was given the seat in the Zamboni" and furthermore, for our American cousins, a clarification is probably needed: no guns were involved. That's just how we "commandeer" things in Canada. The Zamboni was never involved in a high speed freeway chase either.

"the antics were "not what we want to see""=""If that's the case, that is not good. It is not what we want to see," (is what he actually said when an American reporter went running to tell him what was happening, and before he had a chance to investigate. The actual words used by the reporter are not known. But they may have been as overwrought as in the ABC story above.

So this story if nothing else is a great lesson in how use of words can completely slant something quite innocent into a sleazy insult to the purity of the Olympics. And, in the spirit of the Olympics I am going to refrain from making any counter-allegations against the American hockey team, either the men or the women.

The Canadian team apologised for coming out of the dressing room again after the gold medal.

We should not need to apologise for living in a free country, and no apology was needed for a Canadian hockey team "celebrating in public".