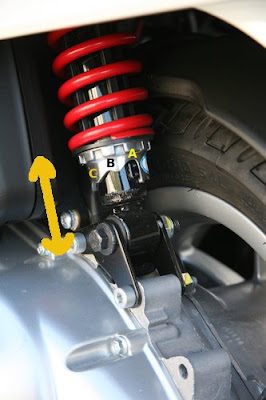 My first motorcycle had no preload adjustment on the rear suspension. Of course I did not know this when I bought the bike, as I didn't know anything about motorcycles. But I started to learn as I started hitting bumps at higher and higher speeds.

A good suspension has lots of travel, which means the amount of vertical movement from the top to the bottom, usually inches or centimeters. You could measure this yourself, if you lifted the rear of the bike until the rear wheel starts to come off the ground, then push the bike down until it will not go down any further without distorting the tire. By the way, if you can manually do this, you may have a bad suspension. Anyhow, the distance you have moved the rear of the bike up and down (if you could actually do it) is equal to the travel. Technically, the travel is the wheel's full motion while the bike remains fixed, but if you can imagine, this is exactly the same if the wheel is fixed while the bike moves. Usually four inches is a reasonable amount of travel for a street bike.

As you ride the motorcycle, hitting bumps, the wheel will move up and down between the two limits on the travel. If it moves up too far, it will hit the top of the travel with a jarring impact. It is called "Bottoming out". If the wheel moves down too far, it reaches the bottom of the travel and the wheel will begin to lift off the ground. This is called "Topping out". The one a normal rider feels the most is bottoming out, because of the spine crunching jolt felt through the seat. Many shock absorbers have a rubber cushion to soften the impact, but you will feel it anyway.

Most recreational riders do not feel the bike topping out, because there is no jarring impact. Also, topping out is usually very brief, so the engine does not have enough time to pick up speed. But if you top out coming over the crest of a hill, you will be airborne for so long, that you will hear the engine start to rev up.

So any motorcycle suspension will have these two limits, the top and the bottom of the travel. If you are always hitting these limits, you may need a stiffer spring, or more damping. But a motorcycle is usually designed properly so that you will not need another spring - unless you are dealing with an aftermarket shock absorber. I bought a pair of aftermarket Koni shocks for my second bike, and I did not get the correct weight springs on the first order, so I had to order a stiffer set of springs the second time.

The most frequent adjustment, and the one provided on almost every motorcycle shock except my Honda CD175, is called the preload adjustment. I show the preload adjustment in the picture, with the three positions marked A B C. A is the "Lowest" and C is the highest. Which means if you turn the collar until A rests on the two knobs, (as shown) the bike will sit lower by a few millimeters.

The reason that this preload adjustment is provided, is to try and make sure that when you are riding without any bumps, or sitting still on the bike, that the spring will hold the bike in the middle between topping out and bottoming out. Actually, you probably don't want to be in the middle. It is better to set the preload so the suspension is closer to topping than it is to bottoming. I'm not really sure why this is, but my guess is that for the most part, you would prefer to top out than to bottom out. And although neither one is really dangerous, at the very worst, bottoming out could hurt your spine, while topping out could result in losing traction and crashing.

Another reason for the preload adjustment, is that when your bike is loaded with more weight, such as a passenger, the preload adjustment helps return the bike to a more level position. Keeping the bike level is important for many reasons. First, is the aim of the headlight. Second, is the ground clearance under the bike especially when cornering hard. Third is the steering geometry. I had another blog about driving in a straight line where I mentioned the importance of "rake and trail". Well, if the bike is not level, it will alter the angle of rake and the length of the trail, which may alter the steering of the bike enough to make it dangerous in extreme cases. Usually, the standard shocks that come with the bike will not permit you to alter the preload so much that the bike becomes unstable. However watch out if it is an aftermarket shock!

In my picture, you can see a yellow double headed arrow, which kind of shows the distance between the end of the spring and the shock absorber end. By adjusting the preload, you are effectively lengthening or shortening this distance, so as to keep the bike level despite changing load.

Just to make sure you have got it, if your bike is loaded heavily and is bottoming out, set the preload on C. If it is very lightly loaded, and you maybe are having trouble reaching the ground, try setting it to A. (in the picture it is set to A.)
Update: I have written another blog on spring stiffness here:
Spring Stiffness