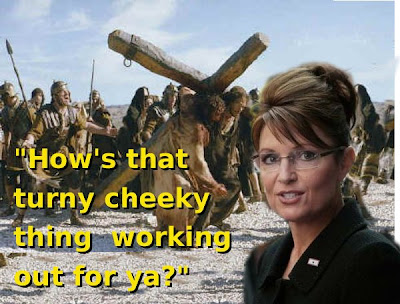 "How's that hopey, changey thing working out for ya?"

This is a nasty comment from Sarah Palin. I'm sure I don't interpret it the way she intended, but for me, the "hope and change" was for America to come back together after 8 years of divisive rule from the conservatives.

Obama has certainly tried his best to follow Jesus's rule of "Do unto others as you would have them do unto you." Meanwhile the conservatives have done everything they could to close ranks on him and make sure he fails.

Although I have always believed to some degree in the idea of "turn the other cheek", as I am a Christian Atheist, I am starting to wonder if using the stick rather than the carrot on the conservatives would not be the better idea. Especially when you have the losers taunting you with "How's that hopey, changey thing working out for ya?" as they refuse to even endorse their own ideas when they are put forward by Obama.

Every time Obama ditches the demands of the left and makes compromises with right wing, they only increase their rhetoric of hate and make more outrageous demands. In this same speech, Sarah called on Obama to declare war on Iran. If he went along with war in the name of bipartisanship, you can be sure the conservatives would hang him out to dry, and when the US loses the war, claim that it was not their idea, so they could win the next election.

I wonder if there is really any point in trying to reach out and forgive people who are so bereft of common decency, not to mention common sense. The very existence of a human beings like Sarah Palin and the teabag party might prove Jesus was wrong. For the USA at least.

Footnote: For any of you wondering why Obama won the peace prize? Because he will never declare war just to win an election, which is something apparently Sarah Palin thinks is reasonable. He deserves that prize for being a principled leader in a country where so many people want the "greedy, warmongery thing", and worship Sarah Palin and Rush Limbaugh more than God.

The picture: Since politics are getting mixed with religion, I put together a montage of Sarah Palin back in biblical times.
Copyright the Lost Motorcyclist