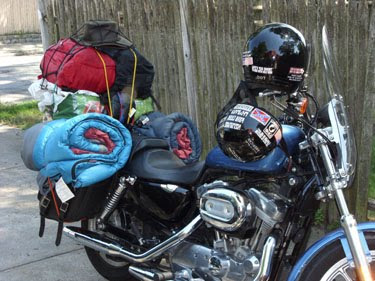 The day I took possession of my first motorcycle, I already had luggage I needed to carry, and my first trip was from the Honda dealer to my home 135 miles away. My small suitcase was tied to the back seat with a lot of string and I headed for home. Everything was fine until I hit the last 45 miles which was mostly washboard gravel road. I had seen plenty of washboard road in northern Quebec, but never with a motorcycle. Washboard is a term used to refer to a rippled road surface, created by the passage of wheeled vehicles, and it is generally full width (shoulder to shoulder of the road) bumps about three to six inches high and about twelve to twenty inches from crest to crest. On a bike with 2.5 inches of suspension travel in back, it is a bone jarring ride, and in 40 miles you may expect to bounce 200,000 times. Honestly I had never experienced anything like this before. True to Honda's reputation, the bike held together under the abuse. However, my suitcase did start to come loose, which I found out by reaching behind while the handlebars bars were being violently shaken, which was not safe. I stopped and retied the luggage even tighter. I tried to slow down, but that only made the hammering worse.

For the rest of the ride, the suitcase kept coming loose. I was retightening and checking every few minutes. The next three months or so of riding my motorcycle consisted of finding a way to strap the suitcase to the luggage rack. On this model of Honda, there was a luggage rack under the removable passenger seat. I finally resorted to baling wire, wrapped over and over the suitcase. Although it took a good ten minutes to wrap it around, at least it didn't come loose, but as luck would have it, part way through the trip I needed to get something out of my suitcase.

I don't know how this discovery came about, but I do remember that around this time my mother sent me a package that included "Bungee cords", which I believe were one of the great inventions of the late sixties. (The term bungee cord as I mean it is an elastic cord with a metal hook at each end for securing cargo to a luggage rack outside a vehicle.) The bungee cord was the "magic bullet" solution, and never again did the suitcase come loose, nor did I have to spend ten minutes tying it down.

Over the years since then I have used bungee cords thousands of times, and I am familiar with not only their weaknesses, but I have a feel for how to attach them so that they don't come off. Apparently bungee cords are not fool proof. For example, they do weaken with time and lose elasticity. And you shouldn't overstretch them, and you should not use them to tie down a rolled up sweater, as the wind may get into the sweater and gradually work a sleeve out until the sleeve gets caught in the back wheel spokes. In other words, yes, things can still go horribly wrong.

About ten years ago, I noticed a new challenger come on the scene, the "Nylon Strap". Soon motorcycling friends of mine were telling me that bungee cords were a thing of the past. These nylon straps looked much tidier and more professional than the often mismatched bungees, but the bungees had proven their worth to me over twenty years and I wasn't about to give up just like that. One morning I was meeting up with a new riding acquaintance for a trip to the USA. He noticed my typically mismatched bungee cords and remarked that I should upgrade to the newer nylon straps as those bungees were not much good. Anyway, he had his tent and sleeping bag strapped on the back with neat black nylon straps. It was not long before I had to stop my bike to recover his sleeping bag and tent that had gone bouncing down the road in front of me. I still use bungee cords to this very day, although granted without the washboard roads there may be other alternatives that could work. Call me a dinosaur.

With specialized motorcycle luggage, each type of bag is designed to go in a specific place on the bike, and each place has advantages and disadvantages. There is the tank bag, which is much in favour in Europe, and that is the place to carry fragile heavy stuff as the ride is smoother on the tank, with less stress on the frame.

Americans have been slow to discover the tank bag, in fact the cruiser riders probably never will because it would block their view of the speedometer, and possibly the road too, as the seats are sometimes very low. American riders have generally gone with saddlebags and trunks. The trunk is usually a box mounted at the very back of the bike over the taillight. Trunks over 15 cm high were illegal in Germany, just to give you an idea of this divide in opinion between Europe and America. Trunks are not good for holding anything heavy, and on a rough road they get an awful pounding. So that's where you may want to keep your hat and maps. But not your camera or beer.

Next we come to saddlebags, an item that is quite popular both in America and in Europe. In England they are called panniers. The disadvantage of panniers is the width, which can make parking a problem, or in European traffic may also pose a problem, as motorcycles can get very close to cars over there apparently. The width also reduces fuel efficiency, as they stick out in the breeze. The two common ways of opening the saddlebags are bottom hinged, more popular in Europe (no idea why), where the door is the entire side of the case and the top hinged, where the door is the top of the case. I guess you can access all your stuff more easily with a bottom hinged case and big door, but since it usually falls out on the road, that is why you might prefer the top hinge. My BMW had the bottom hinge cases, and I fixed the problem by always packing my clothes in another bag that I stuffed into the saddlebag.

With saddlebags you have hard types and soft types. Hard means plastic or aluminum with locks or catches. Soft bags are leather or nylon with snaps or buckles. One real problem that happens over and over with the soft bags is they sag until they contact the mufflers, then they start to melt and finally burn. You are usually totally unaware until a car passes you waving frantically, then you pull over to check, and put out the fire.

Hard cases with locks are best if you need to leave your motorcycle parked with all its luggage. So far I have never had anyone steal my motorcycle luggage, but apparently it can happen. I usually leave my bike parked at McDonald's or Tim Horton's while I'm eating and I can keep an eye on it. At night it's parked at a motel, where I unload it. Or at a campground where I have never had a problem with, or even worried much about, theft.

Just one more comment about European styles vs. American. American tend to carry more luggage. At one campground we were talking to an American couple who were driving two Goldwings and two trailers to carry their stuff. Mary Ann and I were making do with just what both of us could bring on the one BMW. Then I read a funny account in a motorcycle magazine by a European couple motorcycle camping in America. (on one bike with no trailer). They were walking around and noticed an American couple also on one motorcycle with no trailer setting up their camp site. Thinking they had finally discovered Americans who thought like them, they stopped to chat and asked "How did you pack all this stuff on the bike?" The woman answered "We couldn't put all that on a bike!! We Fedexed it to the campground."

Picture: A Harley-Davidson Sportster loaded for camping. You think I photoshopped it as a joke? No. It's taken from the official Harley Davidson motorcycle camping adventures camping website.
Copyright the Lost Motorcyclist