Toyota's Problems Not Over Yet 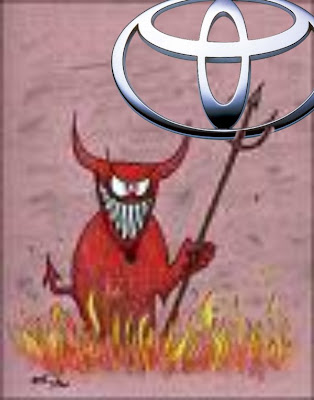 This is probably the first time I have ever learned something from Fox News. On this report, they did discuss an unintended acceleration problem reported by Steve Wozniak, on his Prius. Steve Wozniak is a famous computer person, who apparently has no use for instruction manuals. According to Steve, the Toyota cruise control software sets the speed higher than the speed the car is traveling, at times much higher. The driver may be unaware that they have accidentally set the cruise speed at 1000 kilometres per hour, and as the car continues to accelerate to the new cruise speed, the driver may become scared.

It is important to recognize this as an entirely different problem from the floor mat problem, and different from the sticky pedal problem, too. When I used to work in computer programming, problem solving (or debugging) was one of the common tasks. Much more common than most people think, actually because 99.9% of debugging happens before the product reaches the users. To debug a computer program, isolating unrelated problems must happen before you find a solution to any of them. And you should solve and test each unrelated problem separately.

But I'm guessing that many people see every case of unintended acceleration as the same problem. Whether it is pushing the accelerator instead of the brake, or getting the pedal jammed under a floormat, or the pedal sticking due to a frozen pivot, or a case where the pedal returns normally, but the car is still accelerating because you have the cruise control set to 1000.

The Wozniak cruise control problem is safe because there is a brake override system. If a driver has an accident with the cruise control, they would have to be pretty bad. But I do expect the next generation of drivers to be worse than this one. How could they do worse than driving while reading the newspaper or text messaging on phones, or even standing on the hood of the car? (called ghost driving in case you were wondering, and yes there is a law against it in Ontario). I would bet money that before 2030, we will need to have a law that prohibits the driver from operating the car while tasing themselves in the nuts. Any takers?

As long as Toyota is fighting the battle to solve every unrelated case of unintended acceleration, they probably cannot completely succeed. With the number of Toyotas on the road, it will be impossible to figure out every way that a car can accelerate without the owner wanting it to. Toyota may never prevent the case where drivers deliberately accelerate into something in order to discredit Toyota. Although the people at Toyota are pretty clever, so who knows?

Assuming they can never completely solve all acceleration problems, is there a way to prevent it from resulting in death or injury? One way is to link the brake and the engine management so that pressing the brakes automatically returns the engine to idle. This can be done through software, and apparently other car makers already have this. This solution has also been useful in proving that drivers were pressing the gas pedal instead of the brake. Like everything else, it can also fail, but it is still one of the best solutions to the problem. Apparently Toyota is going to take this approach, but can take more time to test software thoroughly than a simple mechanical fix.

The final result if nothing else, is going to be the end of the age of innocence for Toyota. Their brand will have to change. They can't continue being seen as a fool proof car for your grandmother to drive.

Comparative test results from Car and Driver magazine for braking from 100 kph to a full stop with a stuck throttle. Not mentioned in the article is the result if you do not press the brake hard: the stopping distance goes up to 840 feet at closed throttle. And 120,000 feet at full throttle, but light braking when you will run out of gas, less if you did not start with a full tank.

Also, a video of the throttle mechanism itself