What Do You Mean, Anti American? 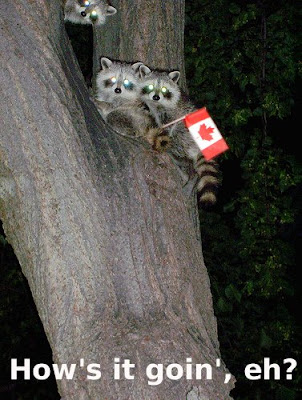 In the last ten years, coincidentally the years of the Bush administration, I have occasionally been accused on the internet of anti-Americanism. This is ridiculous, as far as I'm concerned, especially because the only thing I did was place a peace sign on my motorcycle web page. I put it there before 9/11, if that makes any difference, and it is still there.

I am so like an American that most people could not tell the difference unless I stick a Canadian flag to my motorcycle saddlebag. My only quarrel with any American I have met in person, was about their beer, which was not up to Canadian standards.

I am a very tolerant person, and if I can speak rationally with Muslims and Christian fundamentalists, then why would I be anti-American?

I think the problem comes when some people start to define "American" as being pro-war and pro-torture. Most Americans I know do not accept that stereotype. And I happen to know some Canadians that are pro-war and pro torture. So if I was really anti American I guess I would also be anti Canadian. The most pro-torture character on TV, Jack Bauer on "24", is played by Kiefer Sutherland, a Canadian.

Of course there are some cultural differences. At one motorcycle rally, I was at a restaurant with some Americans. Until that day, I had never, and I mean never, seen someone order the all you can eat buffet AND a full entree. He was an American, and I never fail to marvel at the differences between Canadians and Americans when you dig deep enough. At another rally, again in the USA, I somehow became the butt of some jokes for eating my pizza with a knife and fork. Now, if I'm standing in an open field eating a slice of pizza, I will eat it with my hands. But at a sit-down meal in a restaurant, I have never seen anyone in Canada eat pizza with their hands. So I explained to the Americans present that in Canada, we often use knives and forks.

I told a story from a Canadian camping trip I took to Beausoleil Island in Georgian Bay. One night, we had all our chocolate bars stolen by a bunch of raccoons, who unwrapped and ate them behind a bush, leaving all the wrappers behind. The next night, I stored all our food in the plywood chuck box, and locked it, leaving all the cutlery and cookware out on the table. In the middle of the night I got up with a flashlight to check out the commotion, and scared off a bunch of raccoons. Every one of our knives and forks had been picked up and jammed in to the crack between the lid and hinges. Obviously they were Canadian raccoons.

So let's not make out that being anti-torture is anti American. I personally think that is insulting to many Americans. On the other hand, that stuff they call beer is fair game.
Copyright the Lost Motorcyclist