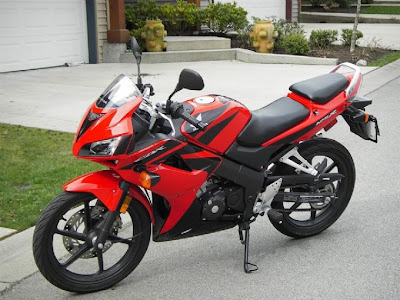 I have not ridden either of these bikes. I have ridden other small bikes, but for people who are thinking of buying a small bike there are some other issues that seem to dominate. That's what I'm writing about.

Let's go one by one. This bike is not going to be boring, and if anyone who actually owns one tells you that, it is to cover up for some other reason why they want to get rid of it. Who knows, maybe their idea of interesting is counting cc's, and the more they have to count the more interested they are. The fact is, that if you are doing the same speed as another motorcycle, it is not boring to have a smaller engine. If anything it is more interesting, and many experienced race drivers have commented on the fact that is is much more interesting to run a smaller machine at full throttle than a big machine at half its capacity.

This does bring up a question that you may not have considered. Do you have the nerve to run a small bike at or near full speed most of the time? Because it does take a bit of nerve to do that. You need to rev it over 10,000 rpm, and you feel like you are riding for a speed record at the Bonneville Salt Flats half the time.

Next question, is it safe to ride on the highway. Actually much safer than a 600 cc bike, as you will never be able to run at the same dangerous speed. Don't believe anyone who tells you that you need lots of power to be safe, that's the story you tell your wife while you look at a machine that has ten times as much power as you really need. No experienced motorcyclist would ever think that you actually need the power of a 600 cc sportbike, let alone the 1000 cc sport bikes. You will quickly figure out how to ride a 125 safely in traffic, and by learning how to make up for the lower power output, you will become a better rider.

Last question, will people laugh at me on the CBR125? That question is much harder. I'm tempted to say buy what you like and don't worry about what others think, but I actually want to say more than that. I can't say how the non-motorcycling public would react to a 125cc bike, mostly I don't really pay much attention to their motorcycle-related opinions. Usually family members are relieved to find out that 125 cc is on the low end of the power scale. For all the rest, buying a CBR125 won't stop people from laughing at you. At least not the way buying a Harley Davidson will. (yeah I just don't understand that one, maybe they are scared that you joined the Hell's Angels or something). But let's say you are not already a laughing stock, that you have reasonably good personality with some sense of humour. Riding a CBR 125 will not attract an undue number of negative comments. Maybe you will find some young teenagers who are not riders themselves, making disparaging comments on the internet. But in real life, with people who actually ride, I would say rare to never. The fact is, any motorcycle that can do 140 kph can kill you dead in an instant, and is not a toy. All real motorcyclists understand that very soon after they get their licence. And although there is some banter in motorcycle circles about whose bike is best, very little of it is directed at smaller bikes like the CBR125. I guess the reason is that the 125's are just not the type of bike where the owners go around making snarky comments about other people's bikes, and so very little retaliation is shown in reverse. And nobody on a 600 cc sportbike wants to be shown up by a Honda CBR125, and it can happen when the road gets really tight and there is a disparity in skill. 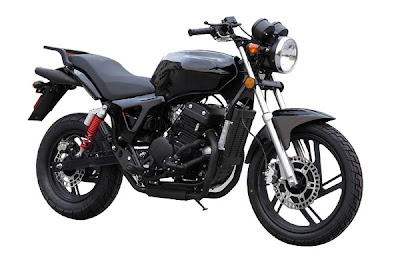 So what is the other bike? It's a Chinese model, the Johnny Pag FX 300 for about $3700. It is a little bit more money up front, and maybe more again for insurance. Being a Chinese bike, the dealerships have not had a chance to develop their service departments to the same degree as Honda. Also the reliability is more of an unknown factor. But people do ride those bikes and have fun, and if you are willing to learn to twirl wrenches, you may be OK. It would likely be a lot faster than the CBR125, and more relaxed at ordinary speeds. It would also be a bit heavier to move around.

Anyway, part of the fun of motorcycling is that we do have choices, and no matter what kind of bike you have, it's always interesting to look at different ones.
Copyright the Lost Motorcyclist