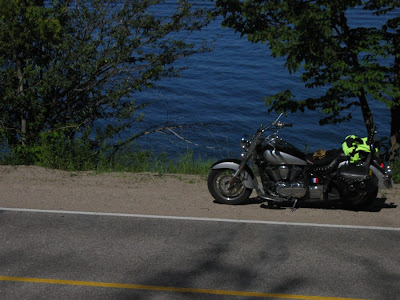 In this day trip, I visited Barrie, Midland, Penetanguishene and Awenda Provincial Park. But originally, I started out from Kitchener with the idea of taking a much longer day trip than my usual Port Dover run, by visiting Parry Sound instead. That didn't work out. The first plan hit a snag on the outskirts of Barrie. Car drivers like to celebrate reaching Barrie on highway 400 by all applying their brake lights at the same time. So I got off at exit 90, thinking I would go to the MacDonald's for lunch and wait for the brake light celebration to be over. However, the left lane leading to McDonald's was backed up all the way to the ramp, so I took the lane less travelled, and went right. I was sure I would find the city of Barrie, but I did not, and soon pulled over in a remote swampy area to check my 10 year old map of Ontario. A young man in a car stopped and offered advice on how to reach Barrie. Apparently the lane less travelled is less travelled for a good reason, it headed back to Toronto.

So I turned around and decided on french fries at the beach in Barrie. I found it without a GPS, using all the pre-computer reconnaissance tricks: Follow any streets named "Lakeshore" something. Note the direction of any young girls walking in bikinis, and that will point to the beach. Finally, keep heading downhill until you hit water, then park somewhere that you can smell french fries.

After filling up on fries, which by the way were excellent, I scrapped my plan to visit Parry Sound, and decided on a little end-of-the-road place called Sawlog Bay in Tiny Township. On the way, I could visit Midland and Penetanguishene. By the time I got to Midland, I could feel that I was ready for a nap. If I have a short nap when I'm feeling drowsy, I will be awake for the rest of the day, and if not it can be very dangerous. So at the harbourfront in Midland, I parked and found a nearby bench, in the shade, where I used my rolled up jacket for a pillow and fell asleep for maybe ten minutes. On waking up, I needed a coffee and donut, and wondered where I might find one. But this being Canada, I decided to simply stand in one place and turn in a circle, scanning the distance for a Tim Horton's sign. I found one on a heading East by South East.

Back on the road, I was using my sense of direction to find Penetanguishene, which I did but somehow I also ended up in the middle of the compound of the Institute for the Criminally Insane. I was not sure how to get back out, and I wanted to ask someone, but how could I tell the difference between the psychos and the doctors? In a normal asylum, sure, it's easy, the Doctors wear the lab coats and the inmates have strait jackets. But in this place, the inmates are also fiendishly clever criminals, who might pretend to be a doctor. So I just drove around without asking directions until I found a way out.

For my next destination, I wanted to get to Sawlog Bay, but missed Champlain Road and got lost again. This time, while I had the map out, a couple on a three wheeled Bombardier Spyder stopped to help. He got me pointed in the right direction, and I made it to Sawlog Bay. I stopped at a little park with a view of Giant's Tomb Island. Then I discovered that Sawlog Bay was not the end of the road, it kept going and got even more interesting as it wound through Awenda Provincial Park. It's free to ride through if you don't stop and use the facilities, which I didn't.

Then I headed back to Penetanguishene and parked at the dock, where there is also a Tourist Information office. I got a little map of town, and asked about the restaurant on the dock called "Dock Lunch" . The information guy recommended the Greek Salad, but suggested that I get the small, which could feed two normal people. The large would need to be shared among three to four. He was right.

I parked right outside "Dock Lunch" and walked in to place my order. I spotted a group of young men watching a tiny TV with excitement. It was Ghana vs. Uruguay in the world cup, I was firmly rooting for Ghana, after living three years in West Africa. The ending of that game has got to go down in World Cup history. The World Cup is popular in Canada, because almost everybody has some country to root for, (or against, in some cases).

I am one of those people becoming concerned about all the warning labels on everything, but up till now I had never seen one like this in a restaurant or bar. The warning sign said "Use the stools at your own risk".

Once the game was over, I managed to finish most of the Greek Salad, which was my "healthy" food for the day, but also tastes good. I noticed two guys on motorcycles, a Kawasaki "Mean Streak" and a BMW K1200GT, and I spent a few minutes talking to them, but apparently I wasn't listening too good, because as usual I forgot their names, although for some reason I always remember the bikes. But this conversation brought up an interesting point. Some motorcyclists these days do not know the engine configuration of their bikes. I think it is not only because they are covered with plastic and you can't see them, but also because they never break down any more and you don't need to look at them. This was unheard of up until the fifties and sixties, when bikes used to have tool kits, and owners manuals that told you important things like where the spark plugs were. Because you would need to know.

By this time it was 6:00 PM, and I had left home at 10:00 AM. Six hours on the road. I decided to take the direct route home, which from Penetanguishene is the highway 93 to 400 south, to 401 west, and Kitchener. By 8:15 I was in my driveway. Such a miracle, these freeways, like being transported through a time warp.

On this longer than usual trip, I went without the windshield or a backrest, and leaning into the wind seemed to reduce the back pain I normally feel after a couple of hours on the road.

One problem that is worse with motorcycles than cars, is riding with the sun in your eyes. Today at 8 PM I had a chance to try out a little trick that seems to work for riding directly into the sun. I put some black electrical tape on bottom edge of the helmet face shield, then flip up the face shield midway, so the tape blocks the sun from my eyes. You only have to move your head a little to cover the sun, and the Scorpion EXO1000 is perfect for this. The face shield holds its middle position well at highways speeds, and the flip down sun screen protects your eyes while the clear screen is up. One strip of tape is enough, you still need to be able to see if you flip down the face shield. When I don't need the black electrical tape, I put it on the chrome headlight shell, where it can help block the sun's reflection at other times.