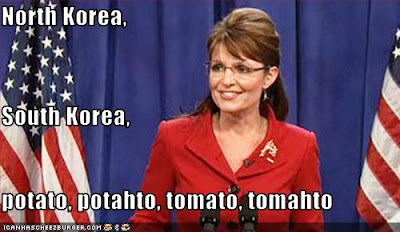 My shortest blog so far. I watched "When Harry Met Sally" on TV tonight, and the song "Let's Call The Whole Thing Off" was playing in the background. Well, the famous line is "I say potato and you say potahto", which gives rise to the expression "Potato, potahto", that I've heard recently. This expression means "It sounds different, but really it's the same". Used in a sentence, it might go like this. "You say it's a bailout, I say it's a rescue. Potato, potahto."

But the weird thing is this, I have known the lyrics to that song for at least 50 years. And for at least the same amount of time I have heard my mother say "have some potatoes" or "eat your potatoes", and she never, ever says "potahto". She speaks with an English accent, (I don't) and yes, she does say "tomahto".

Tonight, for the first time ever, while watching "When Harry Met Sally" it suddenly occurred to me that my mother does not say potahto. I quickly Googled it and found out that no country says potahto. How could it have taken me 50 years to figure that out? So the song really should be "I say potato and you say potato."

The joke is that Sarah Palin thinks that North Korea and South Korea are basically the the same thing with different pronunciation. (or did my explaining it spoil the joke?)
Copyright the Lost Motorcyclist