Where I Find Out About Police Tires 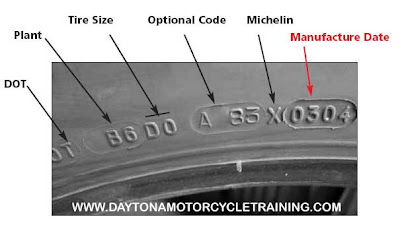 I finally got my new front tire installed on my Vulcan 900 Classic today, the Bridgestone Exedra G703 tire. It had "S" speed rating, and was the tube type (TT). It took about an hour to install while I waited, and I got to watch, so the time passed quickly. I also learned a new trick. The installer put the tube on before the tire. I usually put the tire on first, get one bead on the rim, then put in the tube. It's difficult my way to install the valve through the rim. But the way he did it, he installed the valve first (obviously very easy) then put the tire over the tube near the valve. Then he installed the first bead of the tire, and stuffed the rest of the tube in. I'm going to try that myself next time I change a tire.

After the usual warnings to take it easy on a new tire, I paid up and got out on the freeway to see how it ran. No wobbles or vibration, so it was installed right. It feels lighter at low speed than the worn out tire. Then I took a run to Port Dover.

I parked near a Suzuki 1500 cruiser and started talking to the owner about front tires. He does not like the noise his tire makes. Noise? I never hear my tires make noise. He said it's not actually him who is so bothered, but his son. His son just came out of Tim Hortons, and rides the bike next to his. Yes, his son agrees that he can hear the sound of his Dad's tire over the sound of his own exhaust. As he revs up his bike, his straight pipes are actually very loud. Dad says "You can imagine how loud my tire is, if he can hear it over that." I agree, and furthermore, it seems that if loud pipes save lives, we can probably all benefit even more from such tires.

After they left, a guy on a big Harley with a fairing and top box pulled in and asked if he could share my parking spot. Sure, I said, I was just leaving anyway. He introduced himself, and I looked over his bike for anything interesting to comment on. He had a US flag under the licence plate, so I ducked down under the top box to see by the plate if he was a foreign visitor. Well, it looked to me like an Ontario plate, so I stood up and asked "Are you from Ontario?" If he said yes, I was ready to ask, then why do you have a US flag on your back fender? But I didn't get a chance to ask the second question, when he said "Yes, I'm from Ontario, but not this one. The one in California.". I ducked my head back down to take another look at his licence plate, and noticed in the top right corner the letters CAL.

We started talking further about his trip from Ontario to Ontario, and somehow I brought the conversation around to the mundane topic of front tires. I asked him why he still had those Dunlop tires, and he said he liked them because they were "Police Tires", which means that there is a shoulder on the sidewall all around the rim, so in case the tire goes flat, the safety shoulder will help keep the bead from separating from the rim. He also claimed to have experienced a back tire blowout, and rode it for about ten miles at under 50 mph after losing pressure. I told him I never heard of these police tires before, but sure would want them for myself, as I am afraid of flat tires. He was surprised that I never heard of them.

All the way home, I enjoyed a game of running down the lengthwise cracks in the road (Blue Line Road has lots), and feeling how stable the bike was. Or maybe it was just my imagination. Anyway, who cares, it was fun.

When I got home, I (of course) Googled up "Police Tire". There is a conversation here, explaining that Dunlop insists that the PT's be removed when Police bikes are sold, and will not sell them to individuals because they are not recommended for use with a passenger. They also must be mounted on matching police rims. That is a bummer, because I want them.

Picture: some useful info from http://www.daytonamotorcycletraining.com/motorcycle-tire-tips.htm
Copyright the Lost Motorcyclist