Buying a New Front Tire for the Vulcan 900 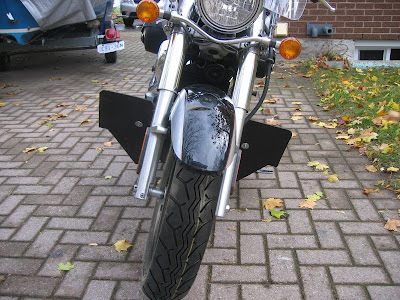 Motorcycle tires are a great disappointment compared to car tires. One of the worst tires I ever had came on the rear of my new 1972 Yamaha 250, and lasted only 2000 miles before I needed a new one. Today, they last longer, but are still far behind cars for tire technology. My Vulcan 900 Classic is still using bias ply tires with tubes inside. Car tires can give me almost 100,000 km of use. Typical touring motorcycle tires last about 20,000 km on the rear, and 30,000 or so on the front. Of course, there are great variations in these figures, depending on the type of tire and motorcycle, and how it is ridden. I am talking about my own usage, where I drive pretty moderately, and I go for the longer lasting types of tire.

One reason motorcycle tires wear out so fast is the round profile that they must have to be able to balance and steer properly. Car tires can have a rectangular profile with a big flat part of the tire against the road. This would never work with a two-wheeled motorcycle, as they must be able to lean over and that means you must have a rounded cross section tread. With a round cross section, only a thin strip in the middle touches the road, and that strip gradually flattens out as it wears, until the tire is unusable. With a motorcycle, the tire usually becomes dangerous as much because of the flattened (or square profile) as it is because of lack of tread.

The rear tire almost always wears out faster than the front, not because of the extra weight, but because that is where the propulsion takes place. Some studies have indicated that adding more weight at the rear actually reduces the wear on the tire. As the rear tire pushes the bike forward, it slips a little against the road, which tears off a small amount of rubber on each rotation. After 15 - 20 thousand km., you usually need a new rear tire.

Front tires also wear out, mostly because of braking. Front tires have an additional problem, in that braking only works in one direction, and the resulting unidirectional forces may eventually produce uneven wear called cupping. This is almost like a series of scoops taken out of the tire, each about 8 cm. long. The rear tire is not affected as much, because it has force applied in two opposite directions, by braking or acceleration, which evens out the wear.

Another thing you may notice about tire wear (if you take it that far) is that the first part to wear out completely is not directly in the centre, but just off a little to the left (about 1-2 cm. in most cases.) This is because we ride on roads crowned in the centre, and we always ride to the right of the crown. Well, not always, but 90% of the time. Riders that drive on the left (like the UK) have this bald spot usually appear on the right of their tires.

Although many riders like to get two new tires at the same time, I prefer to get a new front tire only every second time I get a rear tire. Usually this works out well, but right now I have a new bike, and I made a miscalculation. I replaced the rear tire at 18,500 km, with a Metzeler ME880 tire. But by the time I got to 36,000 km and the front tire obviously needed replacing, the Metzeler was still looking almost new. After 21,000 km of riding, it still has deep treads, so I have bitten the bullet and ordered just a new front tire. This time I'm going with a Bridgestone Exedra G703.

The new rear Metzeler ME880 was a surprisingly long wearing tire, possibly the longest life of any motorcycle tire I have ever had. And in fact I might have preferred a tire with slightly more traction at the expense of shorter life. I have noticed several times, that this rear tire broke traction on me. One time when it was raining, and I accelerated from a stop sign onto a high speed road. Another time, the road was dry, but it was cold and I was going around a traffic circle. (actually that happened twice.) Then, a lot of times when I was braking only with the rear tire, even on a dry road, but maybe that was my fault. At the time I was trying to speed up the wear on the back one, so I could replace both together.

I would not want a tire like this ME880 on a sport-touring bike for three reasons. Stronger brakes, more powerful engine, and greater lean angles.

So, without much research I ordered the Bridgestone Exedra G703, which is a front tire. Even when I started motorcycling, tires were designed specifically for the front or the back. But today, it seems tires of one given size and type are also designed for the model of motorcycle.

Just like in the business of buying car tires, there are more complications. According to Bridgestone, the tire is available in tube type or tubeless, and I'm not sure why there needs to be a difference. It is also available in an H (210 kph) or S (180 kph) speed rating, and I will have to learn what these two unknowns are when it arrives. I probably should have done the research first, but then I actually ordered an S11 Spitfire, and I was called back to say it's on backorder and I could try a different (and more expensive) model. So I made a snap decision anyway.

This is what Bridgestone has to say about them "Designed primarily for American-type motorcycles, Exedra series provides long mileage, good straightway stability, easy handling and riding comfort."

Because this is "adspeak" you need a translation. "American-type"=Slow riding but carrying a lot of weight, "Long mileage"=about 30,000 km on front, "staightaway stability"=you can forget about taking corners at speed, "easy handling"=way better than hard handling, "riding comfort"=this tire is round.

Picture: I photoshopped a G703 tire on to My Vulcan (It has not arrived yet, but I want to see what it will look like.)
Copyright the Lost Motorcyclist