The Subliminal Message of "To Kill a Mockingbird" 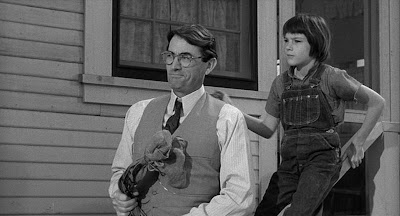 Several news programs mentioned the 50th anniversary of the book "To Kill a Mockingbird" by Harper Lee, on July 11. I was pretty sure I had read the book and seen the movie, and from what I remembered it was a liberal point of view, pushing tolerance and justice.


I did a little research, and found out some interesting facts that I did not know when I first saw the movie.

Surprisingly, British librarians ranked the book ahead of the Bible as one "every adult should read before they die". Apparently American librarians are not so sure, in fact there have been many campaigns to get the book banned. I assume the campaigns are mounted by conservatives.

We are fed a steady diet of slick conservative propaganda today. For example "The Hurt Locker" won the Oscar for best picture. So I wanted to dredge up some old liberal propaganda to counteract it. I reread most of the book, which is available in .pdf here. I had to rent the movie (because it is not on youtube).

My own observation about the movie is that Gregory Peck seemed perfect for it, and later I found out from the DVD that he personally pushed the movie into production, the studios considered it too controversial. To see what I mean about Gregory Peck himself being a "liberal", check out "The Big Country" (1958) on youtube where he stars as an eastern sea captain visiting cowboy country and refuses to carry a gun.

The timing of "To Kill a Mockingbird" was just before the peak of the Civil Rights movement, and you could argue that this book had a propaganda influence similar to the book "Uncle Tom's Cabin" in its time before the end of slavery.

The author, Harper Lee, wrote the book based on her personal experiences. For example, her father was a lawyer who in real life defended a black man, and this incident is the basis for the centre piece of the plot. Harper Lee, as a child, was Scout Finch, who narrates, and is in the centre of the story. Scout is a young tomboy despite the criticism of relatives and neighbours. This give the opportunity for some discussion of gender roles in the book.

Her little friend, Dill, from the book and movie, in real life was Truman Capote, who later on also became a famous author.

What makes this book propaganda? There are a lot of subliminal ideas in here, that you may not even notice until pointed out. Atticus Finch (the father and lawyer) is obviously a liberal. He is educated, kind, tolerant, polite and wise. He always seems to do the right thing, which sometimes takes a lot of courage. You may notice in the movie that his kids call him "Atticus" instead of father, which is shocking to a lot of people, especially conservatives. You may not notice that he never beats his kids. His kids respect him, but at times they also defy him, another shock to conservative parents. Basically, the kids grow up fine (though liberal) in the end, and you may be tempted to believe that it is not necessary to beat your children. All radical liberal ideas.

But the biggest part of the book is propaganda about white people vs. black people. In the book (even more in the movie), all the black people are kind, modest, generous, polite, intelligent, hard working, sympathetic. While some of the white people are mean, nasty, stupid, ignorant, violent, lying, and in need of a bath. Of course it would be more realistic to have a little balance here, but the point of the story is to destroy some of the racist attitudes that still prevailed in the nineteen fifties, and still exist today. That's where propaganda like this was actually needed and useful. (and still is needed today).

Picture: Atticus Finch and Scout (Gregory Peck and Mary Badham), with Scout in boys' overalls and wearing a sort of boyish moptop before the Beatles made it famous in America, but after they started wearing it in Britain.
Copyright the Lost Motorcyclist