The Message is More Important Than the Miracle 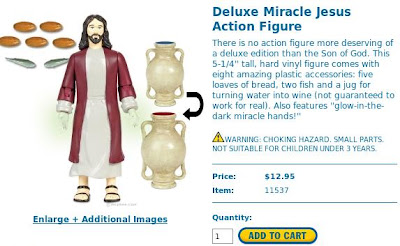 I had this thought twenty years ago. The miracles performed by Jesus were not actually a suspension of the laws of science, they were a transformation of the human spirit. Let's go over a few of them

Jesus transformed water to wine. Why? So that a wedding ceremony could be performed. In my opinion it is more believable, and actually more miraculous, and more convincing, that Jesus worked the magic in the minds of the wedding party, so that they would not spoil the wedding by complaining that there was no wine. I know it sounds a bit like a Jedi mind trick, but let's not underestimate the power of a mind trick. Is Jesus more interested performing parlour tricks to impress the locals, or is he more concerned about altering people's spirits, and making them more open minded towards using water instead of wine?

Jesus fed the multitude with loaves and fishes. Why? So that they would not be hungry during his sermon. They passed around a small basket of bread and fish, not enough for everyone. But everyone ate, and some was left over. Was it because bread and fish materialized inside the basket? Or was it because some people who brought a lunch for themselves, put some of it into the basket to share with others. I think Jesus would be more pleased with people sharing than he would be with the trick of materializing more food. Sharing is part of his message. Creating more food is not the point he was trying to make.

Now we come to the greatest miracle of all, and one that we are called to share in. Jesus said "Love your enemy". What he means, I think, is that by loving your enemy, you will find peace and security. It may not be obvious to some who trust only in weapons and brutal repression for their safety. But according to Jesus, love wins out in the end. It is a miracle, but only if we believe it and do it.

Jesus came to Earth with only one message, it was love. All the rest is froth and fluff. Today, we have some Christians who believe that praying to Jesus can heal their body's ailments, defeat their enemies, and even make them rich, with fine jewelry, and new cars.

Fundamentalist Christians say they believe every word of the bible is true, except for the part about "love your enemy". They are fine with believing that snakes can talk, that Noah's ark held all the animals in the world, that the world is going to end soon, that Jesus is coming to take them and only them to heaven, that devils and evil spirits are everywhere, that God created every man to be evil, and that God created the entire universe only to provide a little illumination in the sky of planet Earth.

But if Jesus says "love your enemy", "Judge not lest ye be judged", "If they slap you turn the other cheek", well that's where they think Jesus is just a bit naive. And so it's not possible that Jesus really mean it, he really meant get every weapon you can and fight for land that is not legally yours, and utterly destroy those that oppose you and hate you.

Some self proclaimed Christians believe every childish fairy tale in the Bible, but cannot imagine for one second that if they stopped bombing innocent people, stopped torturing prisoners, stopped stealing land by military force, that Jesus could be right, and peace might occur. Call it a miracle if you wish, but I certainly think it's a bit more likely than the silly and still unscientifically proven "miracles" being presented to us ever day by some TV evangelists.

Picture: If you really must have this action figure, or others like it, go here
http://www.mcphee.com/shop/products/Deluxe-Miracle-Jesus-Action-Figure.html
Copyright the Lost Motorcyclist