America is Rich: So Simple a Caveman Could Understand It 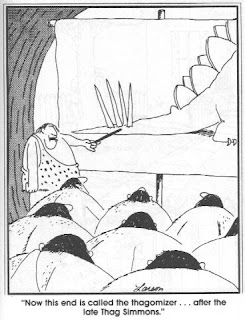 I have found a right wing forwarded email explaining why America is rich. I thought it was worth examining, because so many people have wrong ideas about wealth inequality. It is titled "So Simple a Caveman Could Understand it."

Since the Caveman version is really kind of long and rambling, I will try to edit it down to a manageable size, and then explain it so that a Teabagger can understand why it does not work.

Basically, this is a forwarded email explanation of why America is great and rich, in a way that it is easily understood by the conservatives or libertarians that have not taken a degree in economics. This explanation is not so easily understood by liberals, especially those who have travelled abroad and/or have some further education in how a country's economy works.

By and large, the answer given in the email is that America is capitalistic. Every other economic system is doomed to failure. And anything but pure unadulterated capitalism is also doomed to collapse. To quote from the forward:

"So we're off on a little all-American road trip, this time to figure out why our economy, when sick, is stronger than anyone else's, when healthy. To see if we can figure out how 300 million strangers, all the troublemakers and upstarts from every nation in the world, can come to one vast continent, be given more freedom than any people before or since, and manage to become the most prosperous, powerful, tightly-knit nation in history. And how come we invent everything, too? Must be something in the water out there."

"I believe that there are three elements -- just three -- that we mix in just the right ratio to perform our national alchemy. Look around you at the rest of the world. Those who use none of these ingredients are disasters, basket cases, failed states where misery and poverty crush the life out of what is almost an indomitable human drive to create, to nurture, and to prosper."

"Stop guessing. Sorry, but it's not God, Guts and Guns. The Arabs have God, the Russians have Guts and the Colombians have Guns -- you want to live there?"

The first of these three pillars has several names: private property, the free market, enlightened self-interest. But the first essential element of the American Trinity, and the hardest to come to grips with, is Capitalism.

"Where you stand on the political spectrum, what you think of rich and poor people, and what you think about rich and poor nations and how they should act in the world, comes down, in my mind, to one single issue, and one only: Can wealth be created, or can it only be redistributed?"

"wealth is is context-dependent and there is no universally agreed upon definition. Generally, economists define wealth as "anything of value" which captures both the subjective nature of the idea and the idea that it is not a fixed or static concept."

Now obviously there are different ways to define value. For one thing, anything that is a necessity of life has value. Its exact value is determined roughly by how important it is to life, and by how scarce it is. Next, a more loose definition of value is "whatever people are willing to pay you for what you have". Obviously this is harder to pin down. Just try to auction off Justin Bieber's hair on eBay, and you'll see what I mean.

I am not that keen on things that only have value because of what other people are willing to pay (Bieber's hairs, diamonds, gold bars, paper money, GM Stock) and I have a lot more faith in things that have more inherent value (farmland, real estate, a house, tools, an education). Mind you, even for things that have inherent value, we often determine that value simply by what others are willing to pay. But if the entire economy was to collapse, which would you rather have? Survival skills, or Bieber's hair? Real Estate, or shares of Bank of America?

I suspect that most wealth that can be generated out of thin air has little or no real inherent value. Even if it is a really good idea like the wheel, or fire, or sliced bread, the idea itself is unlikely to reward the inventor. For sure any wealth generated out of thin air is not going to be stuff like tools, land, or shelter. So now lets continue with the right wing economics lesson for cavemen.

"Wealth can be created from thin air by human ingenuity and hard work."

[The anger of Anti-imperialist protesters can be attributed to].. having chosen to believe that there is only so much wealth in the world, and that rich people and rich nations gain and maintain wealth by stealing prosperity from the weak.

This is so idiotic, so demonstrably false, that you really have to wonder why we are having this discussion.

The idea that the United States can steal 10 trillion dollars a year from dirt-poor nations that don't produce anything of value is absolutely insane, and yet, and yet, we hear it again and again and again from the professionally outraged who must be obtuse beyond human understanding to keep making such an absurd lie the basis of their entire philosophy.

Wait a minute, did I read "dirt poor nations don't produce anything of value"??? Isn't oil valuable? What about diamonds, gold, bauxite (aluminum ore), iron ore, rare metals, cocoa, coffee (second largest world trade item after oil), bananas, beans, hardwood trees, fish, and many others. All of these things are produced in dirt poor nations, and wind up in rich nations without the common people in the dirt poor nations seeing much benefit from it. It even seems like the more valuable resources that are found in dirt poor nations, the more the poor people actually suffer (environmental degradation, wars for the resources, toxic air). Then what about the sweat shops producing Nike running shoes. You may consider their work to also be of no value, just like you ignored the work of the slaves, but it has value in a way. It is human effort being expended into an enterprise where there is no reward, just work for survival. There are so many questions that can be raised about this inequality of pay between rich and poor countries. But the lesson is not over yet, so for the sake of argument let's go on with "wealth is produced out of thin air":

If we can prove that our core tenet is correct, that wealth is limited only by imagination and the desire to work hard, then not only does the left's economic theory come crashing down like a Statue of Lenin, but their entire view of US power has to be fatally flawed, as well.

Get this through your heads, you socialist ninnies! There is not a big, limited pot of wealth that is filled with the Magic Sweat of Authentic Third World Laborers, that America uses its military to steal from when we run out of wealth here at home.

Here's something even the dimmest hippy protester / poet should be able to wrap his mind around:

Where did the $999,898.69 come from? It came from thin air! You created it, out of nothing. You added value to the stock of paper and ink you started with. From the monumental talent you possess, the gift of intellect, the pen that made Shakespeare weep with envy, you have created WB3. You've given millions of people two hours of side-splitting hilarity, for which they will part with $8.00... and you have created wealth. What's more, when you go and blow it all on the pointless material crap that makes life so much fun, you'll be bringing in a little extra for the Sea-Doo distributor, the BMW dealer, the girls at Cheetahs in Las Vegas, and all the others. Not to mention putting -- I dunno -- maybe half a million freaking dollars into welfare, Social Security, Medicare, the National Endowment for the Arts and the world's first fusion-powered, laser-armed, flying stealth submarine, the USS George W. Bush.

OK Here's where the lesson starts to get a little heavy handed. I don't know about you, but this is not the tone that my teachers took with me when I was in school. And I hope that I do not take that tone to others.

So to go over the business case that proves wealth is unlimited: I write a script to a movie, and it sells for one million dollars. Forget the price of copies at Kinko's, obviously these costs are so small we can just forget them. However there may be some costs that are substantial, that we have neglected to mention. What are they? An education, where you learn to write properly. And the leisure time to absorb all kinds of interesting ideas, that you can then translate into a clever script. (Do not expect a kid who has worked in a sweat shop all his life to write a movie script. OK maybe if it was a movie about sweat shops???) The education, and the leisure lifestyle, do they have a value? OK, more. What about a legal system that protects your copyright, and forces the big studios to pay you what the script is worth. Any value there? And what about the luck of being born in a country where millions of people can pay $8 each for a movie, and have the time to go and see it.

I suspect that first of all, the movie script is not something with real inherent value, it is more of a "Bieber hair" type of thing, the type of thing you cannot base a real economy on. It's a sideline, a quirk, an amusement. I'm not saying some people don't get rich through this kind of luck, just that it is in fact a zero sum game. Money comes out of other people's pockets (the ones who pay to see the movie), and into yours. This type of transaction also happens when you win the lottery, but I would not base my national economy on it. Because this type of transaction is the very definition of "redistributed wealth". Voluntary redistribution, to be sure, but still redistribution of the same total amount wealth. Yes, it may count toward increasing the Gross National Product, but if it does (I'm not sure about that), it is only because of the way that the GNP is calculated. Your million dollars has in fact made the movie goers a million dollars poorer (all together).

So, core tenet remains unproven. Time to stop, and we have not even found out what the other two pillars of wealth are yet.

Picture: 1982 Far Side panel by Gary Larsen from this blog about cavemen:
http://www.mentalfloss.com/blogs/archives/7093
Copyright the Lost Motorcyclist