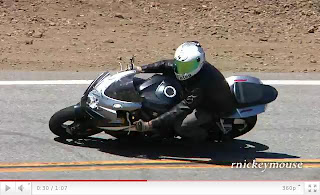 Another critique of cornering style, this time a sportbike. In an earlier blog, I mentioned that sportbikes usually test their limits on a track. But apparently there are places where sportbike riders gather to test their limits on paved public roads. This particular corner is on Mulholland Drive in Los Angeles, and it looks like a well equipped film crew has set up shop to capture the freaky moments. The filming is steady, sharp, well centred, from an excellent angle. Although I am not a pro myself, filming live action like this is not easy, so I think the film crew really know their stuff.

I am not a professional rider either, but it seems to me the rider once again has made several mistakes. One mistake is testing the limits on a public road, although this time he was lucky to not hit an oncoming car. Also, when you know you are testing the limits, jeans are not the best pants to wear, and I don't know about the workboots either - I guess most of the budget went on the bike.

I wrote about scraping floorboards on cruisers in this blog.
http://lostmotorcycles.blogspot.com/2011/01/dragging-floorboards-keeping-up-with.html

The point I was trying to make was that the Harley rider was leaning one way, the bike leaning the other, which forced the bike to run out of ground clearance earlier than if the rider had been leaning with the bike. (or more than the bike)

It looks like this sportbike rider has done the same thing in a sound video that you can follow almost frame by frame.

In the video, I think trouble starts with the body position, the rider is leaning right, forcing the bike to lean more to the left to make the corner. Although the sport bike actually has a lot of clearance, he is going a bit fast on a slow corner. Apparently a lot of videos of crashes are filmed here, which apparently does not slow down the riders much. If anything it makes some of them go faster.

Just before the bike gets out of control, you hear a little scrape. It's not too bad and the rider gets it back under control, and leans the bike back into the corner, and then there is another louder scrape, but this time the rear wheel is being levered off the pavement, and you can hear the engine speed up when this happens. Now traction at the rear is lost, and the back end begins to slide. But almost immediately the bike comes more upright again and the back wheel rubber hits the ground a bit sideways, then gets traction. This stops (or slows) the sliding, but by now the top end of the motorcycle is not leaning over far enough to remain in balance and centrifugal force, or momentum keeps the top of the bike and the rider going, while the bottom (the rubber and wheels) are slowing down drastically.

A motorcycle flipping over like this is called a "High side". That's where the rider is thrown over the top of the bike. A low side happens when the rider simply falls to the ground on the same side that he is leaning. The nice thing about a low side is that you don't fall very far, and I don't think you would slide as far either. I'm not sure about that, never seen any scientific studies, my reasoning is that with a low side, the rider slows down with the bike as the rubber slides away, with highsides the rider departs kind of like a catapult without benefiting from riding the slowing bike to the ground first. Quite often, you can get the rider lowsiding first, and after the rider gets off, the bike itself may still highside (or flip over) as it skids along with no rider.

If you want to see a movie where there is absolutely no possibility of a low or a high side, check out this humorous short film. "Vicious Cycles"

Picture: A frame capture from the Mulholland video, just before losing it.
Copyright the Lost Motorcyclist