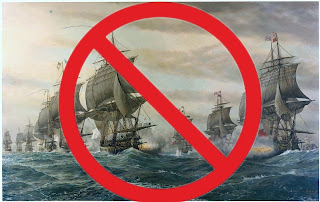 This is a comparison of the Libyan No-Fly zone to a similar policy in the American War of Independence.

Back in 1776, the navy was like the air force today. There was no such thing as an air force back then. The equivalent force would have been the navy. A navy was able to move freely, and relatively speedily across water, was able to bombard cities and carry troops and supplies.

Think of how the Libyan struggle is like the American War of Independence. The obvious parallels (though unflattering I suppose), the British forces in 1776 as the equivalent of Gadhafi's forces, and the American forces as the equivalent of the Libyan rebels. The Americans would have been less professional, and would not have had a navy for support, while the British had a professional army, and naval support. The Libyan rebels are less professional, and have little or no air power, though I suppose they have popular support.

So now we come to the philosophy of the no-fly zone. There was no United Nations in 1776 to declare a "No Sail" zone. So the French decided to send in their navy to neutralize the British navy off the coast of the colonies. In a sea battle called "The Battle of the Chesapeake", the French navy drove off the British navy, and allowed Washington's army to force the surrender of the British army at Yorktown. Shortly after, King George signed a deal to allow the American colonies to go free.

If this history is anything to go by, Gadhafi will eventually step down. But the rebels will show very little gratitude to the people who stepped in to help them, just as the Americans largely turned their backs on the French, once independence was achieved.

Picture: Battle of the Chesapeake from Wikipedia, with my own red circle superimposed in Photoshop.
Copyright the Lost Motorcyclist