Long Distance Motorcycling Without Too Much Pain 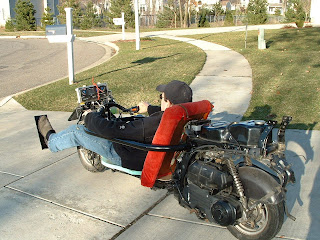 I had started to write about long distance riding comfort, but then I realized the topic was too big for a single blog. So I'm going to deal with just one aspect of comfort, which is avoidance of body pain. So I'm not dealing with staying dry and warm, which is a huge topic all by itself.

I am actually writing about normal motorcycles, although the picture is of a special home built recumbent, which may or may not be comfortable, since I never tried it. Offhand, I would bet it is not as comfortable as a well set up regular bike for 1000 km days. Also you should wear a helmet.

There are many forms of pain, some of which only affect certain people. For example I found out that riding with certain types of bladder stones can cause severe pain every time you go over a bump. And different people have various aches and pains that can be made worse by some types of motorcycles. Obviously I can't deal with all the individual problems, so I am going to hit the most common forms of motorcycling pain. Butt burn being the most well known.

Butt burn, as the name suggests, is a burning sensation in the butt that you get from sitting on most motorcycle seats. The best stock seat I ever had was my '92 BMW K1100LT. I could sometimes go 1000 km before it started to hurt. Other bike seats might go only about 200. But I have no idea why it worked so well. It wasn't particularly big, or soft or anything. It just felt comfortable for a long time. One idea I had was that maybe because my knees were pressed tight against the fairing, my rear end didn't try to move forward or back over bumps in the road, but I never was able to confirm the "zero butt shear force" hypothesis.

You can prolong the comfort of any seat by moving around to different positions. It's better if you start doing this before it hurts, because moving around doesn't seem to cure butt burn once it starts.

I don't have a lot of scientific data on this, it is more of "seat of the pants" idea, but wearing leather motorcycle pants seems to help a lot in prolonging rear end comfort. They may be worth up to an additional 200 km over whatever seat comfort range you normally have.

Aftermarket seats cost a lot of money and I don't know how good they work, but an Airhawk air-filled seat pad can help too. I would rate mine as an additional 300 km. over the bare seat. That works out to about $0.50 per kilometer, on your first long day. (They cost about $150)

If butt-burn is under control, the next item for me is wind noise. A lot of people don't care about this too much, but if you do ride long distances on motorcycles, without earplugs, sooner or later your ears are going to start getting sensitive to loud noises. That is a permanent condition, unlike butt-burn. So to avoid it, you might want to try some good foam ear plugs. These days they are available all over the place. In Canada, Mark's Work Wearhouse has them quite cheap. Just be aware that you will tend to ride faster with ear plugs, because they make you feel like you are going slow when you first start wearing them. Watch the speedometer.

I guess this next one is not exactly pain, it's kind of the opposite. Vibration in the handlebar can make your hand go numb. This is very hard to predict, I didn't know from one ride to the next if it was going to happen. But the BMW four cylinder motor did not have a counterbalancer or rubber mounting, and that bike made my hand go to sleep more than any other bike. By comparison, it has only happened two times on my Vulcan 900, which is a twin but has a front rubber engine mount, and a counterbalancer. By counterbalancer I mean counterweights on a shaft that rotates in the opposite direction to the crank. Apparently this is the only way to cancel primary and secondary vibrations, short of building a straight six engine. These counterbalancers, if the bike has them, are always mentioned in the brochures under features.

If you already have a tingling handlebar and a numb hand, you can try taking one hand off the bar and shake it out. Or you can try shaking it out while holding the bar. Both remedies are equally dangerous as far as I'm concerned. Manufacturers try to smooth the bars with bar-end weights. These are fixed weights and only work at specific frequencies. You may want to try changing the weight (either a bit heavier or a bit lighter to see if it helps your particular situation. Even my 6 cylinder CBX had bar end weights, although the engine itself was very smooth.

Now for back pain. This is usually for older people, but who knows? Back rests are not such a great idea because motorcycles pitch forward and back like a rocking horse, and if you didn't know that already, you will once you install a backrest. On a smooth road they are OK, though. Another solution is a kidney belt. I'm not sure why they are called kidney belts, unless they stop you from drinking beer. But usually they provide some lumbar support, and that really helps the lower back, without the disadvantage of slamming you in the kidneys over a rough road, like a backrest would. Anyway, on a rough road, you should be able to lean forward and avoid contact with the backrest.

If you have neck and shoulder pain, it could be because your helmet is too heavy or poorly balanced on your neck. Or it could mean you have a windshield which is directing a reverse current of air onto your helmet (also called back pressure), forcing you to use a small group of muscles on the back of your neck and shoulders. I had this pain for years, and now it's gone. I cured it by getting a windshield that I could retract until I had wind in my face again. Now I have a different bike with a non-retractable windshield, but for some reason the pain has not returned.

I know other people who have pain in their wrists, and pain in their knees. I can't say much about that, because I seem to be OK there so far. But I imagine the solution there might also be moving around a bit, if you can. I generally like to find at least three comfortable and safe alternate seating positions that I can take occasionally to give the standard position a break. And usually I will do this with no traffic around on straight roads.

I wear a full face helmet with a visor, which prevents the pain of bugs, rocks and raindrops on my face at 100 kph. Goggles may also work if you don't hit the bee right on your nose. By the way, I also have been hit by rocks on the foot and leg and knuckles, and had a bee go up my sleeve and sting me. There is also the pain of going down and sliding on the road, but I don't call that "long distance motorcycle riding".

You may have a motorcycle that is simply not designed for comfort. I would be concerned about extremely low handlebars and high footpegs on some sport bikes, for example. Although I see some people with bikes like this that do ride long distances. It just goes to show that comfort is an individual thing.

Finally, your clothing, boots or helmet may cause pain. If they do, you have bought some bad clothing, because they are not supposed to hurt. Get rid of them, or fix them. What's that you say? You can't, because comfortable clothes are not stylish enough? If that's what you think, you are probably not the type of person who rides motorcycles long distances. And I mean that in the nice way.