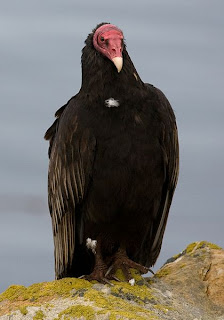 Last night I was at the monthly meeting of the Kitchener Waterloo Field Naturalists Club (KWFN). I am a member of the club mostly because of Mary Ann's interest in bird watching and nature. But I have to admit that I am not as highly interested in birding as she is. However last night three people from "Wild Ontario" did a presentation at the monthly meeting that even got my attention.

They brought four live birds to the meeting, a Kestrel, a Broad Winged Hawk, a Great Horned Owl, and a Turkey Vulture. These birds had been rescued, but because of permanent injuries it was not possible to release them back into the wild. So the group has a public education program that uses the birds to teach people about nature. I certainly learned a few things from their talk, which seemed to be geared to hold the interest of anyone from five years old up, and I'm thinking even the most avid birders at the club meeting must have learned a few things too.

Some of the things I learned?

I was especially interested in the adaptations that give the birds advantages in finding food. For example, the Peregrine Falcon is the world's fastest living thing at 349 kilometers per hour.

Peregrines use their dive speed to catch flying birds. And no it is not considered "cheating" to achieve this speed in a 45 degree dive. In nature there is no cheating, there is only catching food or not being caught for food.

The Kestrel uses its ultraviolet vision to see vole tracks. I never heard about this before, but apparently this discovery was made in about 1995. The Kestrel can also hover in one place, which not many birds can do.

The Great Horned Owl has three dimensional hearing and binocular (or 3D) vision. Humans also have 3D vision (useful for going to movies like Drive Angry 3D), but many birds have eyes on each side of their head which give a wider field of view, but give up binocular vision to do it.

The Turkey Vulture has quite a few adaptations that allow it to feed on the intestines of dead animals. While the Owl has no sense of smell, and therefore can feed on skunk, the Turkey Vulture can smell ethyl mercaptan, a gas produced when bodies begin to decay. This ability has been used to test gas pipelines for leaks, as vultures will gather if the line leaks and ethyl mercaptan is being pumped through it.

This presentation was an extraordinary opportunity to observe close up some birds I would rarely be able to see in the wild. Staring face to face with a Great Horned Owl, guess who blinked first? I have to admit that standing outside in the cold hoping to see a Spotted Wood Thrush a hundred meters away is not as much fun for me as having these birds inches from me in a warm, well lit room. I am obviously not a natural at birding.

But during the talk, my mind was wandering a bit. I was also thinking about comments I have seen on the Internet about "Intelligent Design". I'm sure many Fundamentalists would consider these birds further proof that it would take God's own intelligence to design all these wondrous abilities. I see it as quite the opposite. If God designed these birds, I would give him an A+. If he produced the bible, that would be about a D-. Unlike studying the bible, when you are studying nature, the more you learn, the more impressed you have to be. And sooner or later, I hope this could result in humans starting to have more respect for the environment than for an old book.

Picture: A Turkey Vulture. This is not Socrates, the one-winged Vulture from the show, it is a picture from this site. Socrates lost a wing in a car accident 23 years ago, and was the original bird in the Ontario Wild program.
Copyright the Lost Motorcyclist