Why There is a No Fly Zone Over Libya 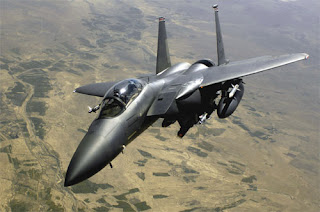 Is there any way to make sense of Canadian and US actions in Libya?

A few nights ago, I watched a panel of experts discussing Libya on TV Ontario, "The Agenda" with Steve Paikin. A serious question was asked. Why take the trouble to bomb Libyan forces and ground installations, when we are not doing the same in Yemen or Bahrain, where protesters also have been killed? And why do people who opposed the invasion of Iraq support this? From what I heard not one person on the panel had the obvious (to me anyway) answer.

If the question is "why are we bombing Libya, but not Yemen and Bahrain", the simple answer is "Because Libya is the only government using the air force to bomb their own cities." To me, it seems fair and even reasonable to deny the dictators the use of air space when it comes to bombing their own people. But that is only the first part of the answer. Second part, possibly even more important, is that the United Nations agreed to a no-fly zone to protect the Libyan people from their own air force. It is very difficult to get the UN to agree on taking forceful steps. In Iraq, the UN did not agree. For Libya, the UN agreed. Of course, if you hate the UN, as many conservatives do, this approval means nothing.

Now, if the uprising in Libya fails, it is at least going to fail on a more level playing field.

Both these reasons carry a huge amount of weight with me, I cannot understand why most commentators in the US and Canada downplay them. Even Jon Stewart, on the Daily Show, who I normally agree with, seemed to ignore these reasons for bombing Libyan facilities.

If only one country, or one isolated group of countries tries to attack another country despite widespread disapproval at home and internationally, that smells of warmongering. That's what happened with Iraq, and it was a big mistake, regardless of excuses.

If just about every country in the United Nations, (including in this case Libya, but that would not be typically necessary) agrees to use force on Libya, to establish a no-fly zone, this attack is not warmongering.

Now for the people who said Obama did not act fast enough. I never heard any mention of the many US and Canadian citizens working in Libya when this protest broke out. What do you think Gaddafi would do to those people if air strikes were called before they could be found and evacuated?

With this type of discussion going on on TV, its no wonder people can't make sense of anything.

Just another example of what I call mindless babble on TV. I saw an ABC news show this morning, with a picture of the downed US jet, and the News Anchor commenting that "when you see the pictures there, of just the damage from the crash, the fact that these two pilots are OK this morning, that's just incredible." Given that the crew bailed out, what does the condition of the plane after it hit the ground have to do with their survival? Then the expert, Martha Raddatz, talked about how the crew knew very well how to eject. Exactly how much training is it supposed to take to know how to hit the red eject button? I'm thinking the tricky part is knowing *when* to eject.

Picture: F15 from the Internet
Copyright the Lost Motorcyclist