How "Brandwashed" Applies to Motorcycles 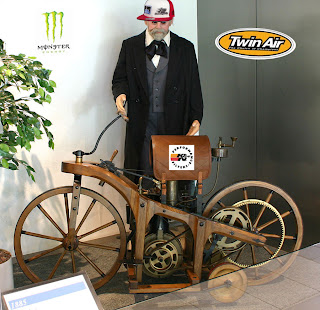 I'm going to explain first the humour in the picture at the left, in case you don't get it.  A long time ago, we did not have brand logos plastered over every available square inch of space.  So I took a picture of a long ago motorcycle, and updated it by plastering brand names on it with Photoshop.


I am reading the book "Brandwashed: Tricks companies use to manipulate our minds and persuade us to buy" by Martin Lindstrom.  Martin says this book "picks up where Vance Packard's bestselling classic "The Hidden Persuaders" left off more than half a century ago."  (Note, this is not a final book review, just my pre-emptive first thoughts about the book)

Coincidentally, I did read The Hidden Persuaders about half a century ago. I felt like it opened my eyes to the tricks marketers used at the time (and still use), and it also made me aware of the high powered science and research that goes into marketing.  So over the years I have been on the lookout for new marketing techniques, and although I consider myself a brand skeptic, I also understand that just like everyone else, I can still be fooled by newly invented tricks that I may not see coming.  And I can be fooled by old tricks that I am simply powerless to fight.

Before really getting into the book, I started to wonder about the definition of branding. After all these years of being on the lookout for marketing techniques, I would like to know just how deep I am in the consumer culture.  Martin Lindstrom's definition of branding is quite open. On Page 2  "In my line of work I look at life through a particular lens:  one that sees everything on Earth ... as a brand".

Lindstrom says the band Abba is a brand.  He liked them when he was young, and still likes them now.  But what I find very telling, about Lindstrom's mental state, is that he apologises for listening to Abba.  In my opinion, if you are apologising for some "brand" you like, you are responding to brandwashing just as much as if you were boasting about a brand.  Again, it's only my opinion, but someone who truly does not respond to brandwashing, should neither boast nor apologize for a brand they have.  Boasting and apologizing are simply two sides of the same coin.  That coin is to manipulate your feelings about brands.

Lindstrom says "by the time I was five I was already preoccupied with a handful of brands. Lego, Bang and Olufsen, James Bond, the pop group Abba (I hereby apologise).  .... and later... All right I confess it, I still listen to Abba every now and again.  In my defense, I am Scandinavian."

In my own life, I can easily identify a handful of things that I like, I might even say I am obsessed with. Let's start with motorcycles, there are lots of brands involved in motorcycling.  You have the motorcycle manufacturer's brand, then you have brands involved in the accessories, in the fuel, oil, helmets, jackets, boots, accessories of all sorts, tools, magazines, movies (I saw Easy Rider and have the DVD), and owners' clubs.  I am not particularly brand loyal about my motorcycle.  I'm riding a Kawasaki Vulcan, which I'm not even sure that Kawasaki is proud of, as there are very few places you see the word Kawasaki on the bike, compared to Harley Davidsons. The Vulcan is still a motorcycle, but not a highly sought after brand - at least not for that type of motorcycle (i.e. Harley lookalikes).

Although my helmet is a Scorpion EXO1000, I have peeled the logo off it. But that may be a case of brandwashing too, because if it was a really expensive brand like an Arai, I might have left it on.  I also have a Scorpion brand jacket, that is another hint that I might be brandwashed, in that I went back to the same brand for a jacket, thereby showing some brand loyalty.

The way I see it, branding is only a part of the overall consumer culture, where people mindlessly go out and buy things that they don't really need. But when you buy things with a brand name, that are advertised, and sell for a premium price, that you really don't need, then I guess you are really "Brandwashed".

I don't really need a motorcycle either, but I have one or three.  I'm probably brandwashed to some extent, and that motorcycle is the evidence.  It (or they) may not be the top brands like Harley-Davidson, Triumph, BMW, etc. but that does not really matter.  On the other hand, I have not put myself in debt to buy them, and they help keep me from buying Rolex watches and getting obsessed with various other consumer items like winter cruises, big houses, yachts, and Ferraris.  So it's like fighting fire with fire. I buy motorcycle stuff that I don't need instead of more expensive non-motorcycling stuff that I also don't need.  It saves money.  Or so the argument in my head goes.  (arguments in my head are another hint I may be brandwashed)

One thing about motorcycling, that is an anomaly in the marketing world, is that motorcycles are not much of a status symbol outside of the community of motorcyclists themselves.  The many normal North American consumers consider motorcycles something to be ashamed of, not to boast about. Motorcycling itself is counter-cultural, even though it can also be considered a culture of its own.  So maybe that's why I didn't see much about motorcycles in Martin Lindstrom's book.