Is the Prius a High Performance Car? 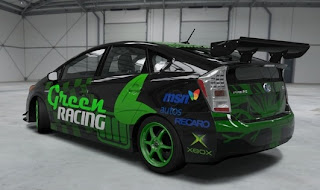 So the Prius has a lot of baggage to deal with, especially in the USA. However, in California it is outselling the Ford F-series pickup trucks, which surprises me.

I was reading an article in Jalopnik.com, about this latest development.  The article itself was highly critical of the Prius, and many of the follow-up comments were as well.  There were two often repeated claims, first that the Prius damages the environment more than a Ford pickup truck, because of its battery technology.  And the second is that the Prius must not be referred to as a high performance car, because high performance implies speed, and not efficiency.

Is the Prius really that hard on the environment, compared to say a for F250 pickup truck?  Well, it's easy to make a claim like that, but takes some time to disprove.  I didn't see any sources for this improbable fact. And frankly I get tired of bullshit-like claims being made with no supporting facts, which then take a lot of my time to investigate.  I think its time for a new rule.  If you want to make an improbable claim, you need to cite authoritative sources.  (e.g. not Fox News or the Heritage Foundation)  I remember a few years ago writing a blog answering a critic who claimed that a bicycle created more CO2 than a car.  People will make stuff up, I just wish other people had enough common sense to ask for proof, instead of absorbing stories as if they were the gospel truth (by the way the gospel is .....  oops I must not get off track here).  The link to my blog about why a bicycle saves more gas than a car is below, that was back in 2009, when I made more of an effort to respond to stupid and unsupported claims.

Now, a more interesting claim, because it is actually believable, that a Prius is not a High Performance vehicle, because it does not go fast.  Most people would think that, and I sort of understand why.  So I am the one taking a position that has the burden of proof.  And I am willing to accept the challenge.

The history of high performance cars has always had something to do with speed, but it has also always had something to do with efficiency.
A practical car could not even be made until fuel efficiency reached a point where the car was able to carry it's own fuel.  Most NASCAR fans cannot remember a time when fuel efficiency was so bad that a car could not physically carry its own fuel  around one lap of a track. OK that never happened at a NASCAR race, because you could not have NASCAR until practical cars were invented.   But today, it's quite different and we sometimes completely ignore the aspects of efficiency in a high performance machine.  Well the spectators often do, anyway.  But the race teams, the engineers and drivers all know the importance of efficiency.  After all, they have certain limitations on the amount of fuel they can carry.  The rules often (I should look this up, of course, but I think it is ALWAYS, not just often) stipulate maximum size of a gas tank, and maximum displacement of the engine. Given these parameters, your performance is governed by, or limited by your efficiency. Performance is a combination of speed and efficiency. And additionally, in Formula One racing, I believe that pit stops to refuel have been banned.  A lot of racing fans hate this because they think it makes the entire race nothing more than a fuel economy rally.

So if it is true that hybrid technology is a high performance item, then you would expect that outright race cars may use hybrid technology to increase their efficiency and therefore overall speed.  The 24 Hour Le Mans race is an example.  It is not exactly the same type of hybridization of the Prius, but it is using the same principal, of capturing braking energy to use for a temporary boost in speed.

Picture.  It's just a joke, more or less. http://forums.forzamotorsport.net/forums/thread/5202580.aspx
Copyright the Lost Motorcyclist