Try Going Just One Day With No Texting and Driving 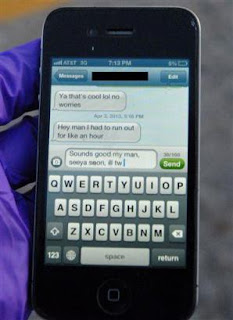 Alexander Heit, 22 years old, was in the driver's seat, head down, while the car carrying him was drifting into oncoming traffic. The oncoming driver slowed and avoided a collision, but when Alexander looked up, he over-corrected, and rolled his car. Officers found his cell phone with a partially complete text message at 5:16 p.m.

His parents released an image of the message, hoping no one else has to die while texting and driving.

What lesson do we learn from this?

Here is a link to an article, it has a video with a commercial intro, so if you don't like that sort of thing, try the second link
http://www.9news.com/news/article/329758/222/Parents-hope-sons-last-text-saves-lives