Of Harley Riders and Helmets 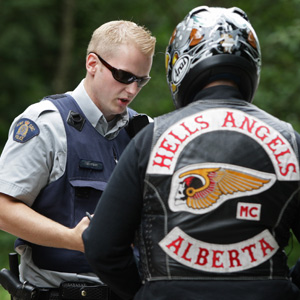 I have been looking at replacing one of my helmets, as I have seen very inexpensive helmets that look safer than a few of my own helmets. During my research, I came across a thread with an age-old question, but because of the lively interest and revealing comments, I decided to summarize it here. It is on the HD Forums, and the thread has 73 pages of responses (I didn't count individual comments.) The topic is stated, interestingly as "Real Harley owners don't wear full face helmets?"

An interesting aside, before we get to the "real" answer to this question.  When Apaolo (the original poster) bought his Harley, the salesman at the Harley shop commented that Apaolo was "the youngest person he had ever sold a Harley to".  So Apaolo is .... 28 years old?  Are you kidding me?  Or maybe the salesman had only been in this line of work a couple of weeks.  Anyway back to the story.

I do find it refreshing that almost none of the replies to this thread argued against the safety of a full face helmet.  It used to be that this was a contentious issue, where many riders complained that wearing a helmet made you less safe.  Apparently that bogus argument is done with now.  So the jury is in, and full face helmets ARE safer than beanies which are in turn safer than a bare head.  This is now accepted by the vast majority of motorcyclists, even among those that do not wear a helmet.

The most common answer?  A real Harley owner (whatever that is) apparently does not give a fly*** f*c* what anyone else thinks of what he is wearing.  I'm not so sure this is true, but I do understand where they are coming from.  Motorcyclists in general are kind of nonconformist, and pretty much have to be that way to ride a motorbike.  They all understand the very real dangers involved, and mostly respect an individual's right to stack the odds of survival in their favour.

On the other hand, it seems to also be true that when groups of riders ride together, they tend to have similar attitudes toward helmets.  Helmeted riders do not like riding with helmetless riders, and vice versa.  I think I understand this, because the logic is quite simple.  If somebody in my group crashes during a ride, I am kind of squeamish about looking at them if they have brains spilling out.  So, to prevent this squeamishness from happening to me,  I would rather ride with people who have well protected heads.

From what I saw of the answers:

Many Harley riders do wear full face helmets, especially where the law requires some kind of helmet anyway, or where it's really cold, or where there are lots of bugs or rocks flying through the air, or when they go on long tours, or when they are on the freeway.

And some do not wear helmets, (if not required by law), or wear smaller helmets  for example if they are just going down to the corner store, or it is really hot outside, or if it is 1940 and they are in the middle of Nevada and there is no traffic around.  Some people just like the feel of wind in their hair, or have bad claustrophobia in a helmet.  One rider said he never wore a helmet but always rode with a gun for protection, which I found interesting.  I wonder where he rides that a gun is more important than a helmet.  Anyway....

I didn't go through every single comment, but I didn't see any that argued against the safety of the full face helmet, and I didn't see any that criticised Apaolo for wearing a full face helmet.  One helmetless rider admitted that Apaolo had more sense than he had for wearing a helmet.  Another offered to wave to Apaolo, regardless of choice of headwear.