Trudeau vs. Harper About Bombers 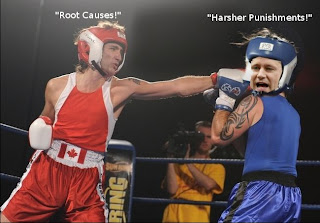 Canada's Federal Liberal Party has a new leader, Justin Trudeau, son of the famous Pierre Trudeau who was Prime minister of Canada during the seventies.

Already, it looks like there is a battle between the present Conservative Prime Minister, Stephen Harper, and Justin Trudeau.

The opening salvo, fired by the Conservatives, was a round of attack ads, taking Justin's words, quoting him as saying "Quebecers are better than the rest of Canadians."*  And the ads continue on to say "Trudeau is in over his head."

Now back to real life, and hours after the bombing of the Boston Marathon, Justin says in a CBC interview, (in part) "we have to look at the root causes".

Was Justin's comment an attack on the Prime Minister?  Whether it was an attack or not, it did draw return fire from the Prime Minister. A few hours later, then Stephen made a statement that people should not be sitting around rationalizing or making excuses for bombers.  All we should do is make sure we have harsh punishments.

And now the ball was in Justin's court.  He could back down and apologise to the Prime Minister. Or he could ignore the jibe.  Or, I guess he could tell the Prime Minister to shut up and mind his own business.  What did Justin do?

Justin said [something like] the Prime Minister should rethink how far he wants to go in politicizing tragedies.

This really got the Conservatives fired up, and there were counter-counter attacks on the CBC program "Power Politics with Evan Solomon".  On that show, the NDP (Now Canada's official opposition party) jumped in on the side of the Conservatives, saying an apology from Justin Trudeau to Stephen Harper would be nice.

This is not over yet.

There is obviously some kind of school yard fight going on.  The new guy has shown his face in the playground, and words get exchanged with Stephen, the kid with the biggest entourage.  Some might call him the bully. So the way you view this altercation will depend on your view of Stephen Harper.  I personally am leaning toward cheering on Justin.  He has certainly shown willingness to stand up for himself.  But can he also be disciplined and in control of his emotions?  In my opinion, the worst he could do would be to apologise for that simple statement.  Because it is actually true that we need to look at what might be motivating these psychopaths.  Yes, you heard that right.  Even psychopaths have some kind of motivation.  And it is possible to know what it is, and we need need to know what it is. Harsh punishments cannot be the only answer.  A Liberal must not apologise for supporting a scientific approach.


* P.S. Is it true that A. Quebecers are better than the rest of Canadians? B. Justin really said that?

As I was born in Quebec I am inclined to agree with A. although it may not be a good thing for a politician to say publicly.  But it seems that for B. the answer is no, that is not what Justin said.  The conservatives edited a sentence in order to isolate those words.  I think that tells you a lot more about the tactics of Conservatives than it does about Justin Trudeau.