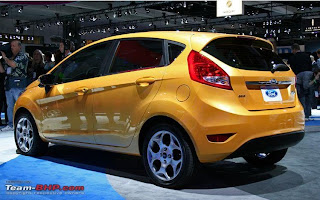 I happened to be at a Ford dealership yesterday and noticed a 2011 Ford Fiesta hatchback. What caught my eye was the Transport Canada rating of 58 mpg highway, significantly higher than my Toyota Matrix's rating of 48 by the same agency. (Canadian gallons, or 4.9 l/100km)) Because I like the hatchbacks, and cars with good fuel economy, I stopped in to talk to a salesman and find out a bit more.

There were some very interesting discoveries. First is that the high fuel economy comes at a price. Usually, you can get the best fuel economy on a stripped down standard transmission model with no options. Now economy is being marketed as an option. The Fiesta has a "Super Fuel Economy" package listed at $500, which is "side tire deflectors, underbody shields, lower grille blocker, cruise control, spare wheel with wheel cap (?), and a rear spoiler on the sedan. (the hatchback has a spoiler standard). Then the book says "requires 6-speed automatic." The six speed auto is listed at $1250 and it is a dual clutch transmission, automatically shifted for you.  My Ford booklet did not mention the low rolling resistance tires, that I think are also part of this package.

The SFE package is worth 3 mpg, the automatic transmission has a 2 mpg advantage over the manual, so it will cost to make those extra drops of gas work for you. And the six speed has no manual shift mode.

According to the MPG-Omatic test below this Fiesta is missing an real time mpg readout (I cannot confirm this yet , apparently it is standard on the Euro model) , which I will want for my next car. That is a pretty cheap item to add, and I want one. I think they should be in all cars, even Hummers (as a punishment). But in a Fiesta with good fuel economy, it would be a shame to miss it.

The Fiesta hatchback is 3 in. lower and 11 in. shorter than my Matrix. The hatchback model is simply the Fiesta sedan with the trunk lopped off. So it has less overall room than the sedan. I would prefer a station wagon type, where the roof line is extended to the end of the sedan's trunk, to get more room. Or at least part way. The hatchback is not available in standard trim, and so it is also more expensive than the sedan. That was a problem I had with the Mazda 3 hatchback five years ago, where it was not available with the standard engine.

Speaking of engine, I like variable valve timing, which is becoming more common. This Fiesta has a 1600cc "Twin independent variable camshaft timing". Unless this is just marketing hype, I'm assuming that is better than my Matrix's system of adjusting both camshafts together.

Anti-nibble electric power steering which compensates for wheel imbalance, side winds and road camber. If I was to take a test drive, that's something I would be paying close attention to. Being as lazy as I am, I hate constantly having to move the wheel back and forth, and correct for side winds. One more step to the car virtually driving itself. And of course I hate the feel of a vibrating steering wheel.

So to sum up, I thought the hatchback with good fuel economy would be available as a base model, but I was wrong. The hatch is an upscale model only, and I would also need the automatic transmission to get the best fuel economy. I'm going to need a new car in about ten years, so that gives some car maker the chance to look at the Fiesta, and make a hatchback model a bit longer, in standard trim, with an MPG readout on the dash (that I do not have on my Toyota Matrix). I don't mind shelling out $1500 for a 6 speed dual clutch automatic, if it gets better gas mileage, but make sure there is a manual override. That would make it more fun.

I forgot to mention the Fiesta fuel filler with no screw on cap. Last night I almost could not get the Matrix cap back on, I was shivering from standing there in -10c waiting for the gas to fill up. (yes I was wearing a parka and gloves) I want one of those no-cap fillers.