I Missed Going for a Ride in December 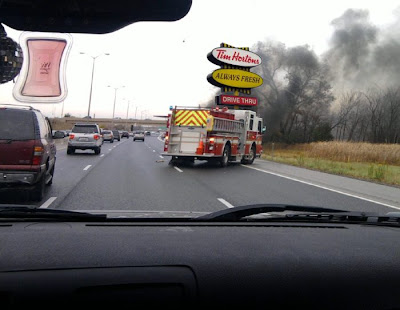 Because of December, I missed my goal of getting at least one motorcycle ride in every month last year. Oh, I have excuses, though. In December southern Ontario had so much snow that the 402 was shut down for 30 hours. But in reality I probably could have got out at least once if I was really serious.

Now I am starting to get a bit desperate. I can tell because I am Googling accessories for the bike. A $700 Mustang seat with a backrest might be nice. But Mary Ann is already mad because she just added up the costs from 2010 and according to her figures I apparently spent about $3000 on going out to restaurants and cafes. It's no use arguing with her that she went with me most of the time. So now I have to choose between a Mustang seat and a King's All-U-Can_Eat Buffet. And I can't eat the seat, so the decision is now made. I don't even know why I was interested in changing the seat anyway, the stock seat is perfectly adequate for the type of riding I do. (Mostly to restaurants and cafe's)

Most of the snow melted a few days ago, so it's tempting to go out right now before it piles up again. But I am worried about running into wet roads and salt spray. Last year I started to find some serious pitting on the Vulcan's wheel rims. It does not matter all that much, as the wheels are rarely clean enough to see the metal. But my worrying abilities have x-ray vision. Just because it's out of sight, does not mean it's out of mind.

It might have been a good day for a ride, but my motorcycle Gang was having an important noon meeting, and I was late so I took the Toyota Matrix. I was making good time down Homer Watson Boulevard until I came up behind a firetruck with the lights, sirens and horn blaring. It was a bit frustrating for a while because I had to disengage my home made cruise control (the Toyota floormat on top of the gas pedal). After a few more minutes I noticed an unexpected advantage. The fire truck was tripping all the traffic lights to green. And also all the other cars were pulling over and stopping to let us by. Anyway soon we were at the end of Homer Watson down by the 401 exit, and the fire fighters shut off the flashing lights and went into the Tim Horton's. I wondered what the heck was wrong with the six other Tim Horton's we passed on the way down here? I guess maybe they weren't on fire. Anyway I got to the meeting on time.

Picture: So what are the clues that I photoshopped the picture? Well, there's no actual Tim Hortons, just the sign. And the firetruck does not have the usual Kitchener paint scheme. And the wiper blades are not the beam type blades I wrote about last month. I don't have a disco ball on my mirror, nor would I ever have one. Or that other unidentified object also blocking the view. And the cars on the road have not pulled over to the side.
Copyright the Lost Motorcyclist