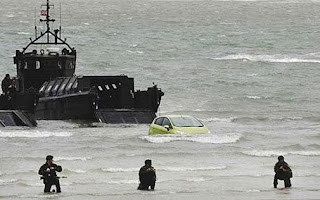 What a piece of marketing propaganda, and coming from where? the most unlikely source, the BBC!

A Ford Fiesta gets tested by a TV car show called "Top Gear". In the test, it is allowed to take part in a beach assault. It is carried by a Royal Marines landing craft and Jeremy drives it ashore under fire to let off one of the soldiers on the beach.

The episode has got to have had a huge positive impact for Ford Fiesta sales. Ford could never have hired the Royal Marines for their own commercial, and even if they could, it would not have had the same powerful effect. But apparently the Royal Marines are willing to cooperate with a BBC TV show, and in return they get some positive media attention for themselves.

During this spot, Jeremy manages to avoid looking like a Fiesta commercial by calling the car shit several times (but only the stripped down model) and dismissing its "green" features in a joking way. However, everything else he says about the car feeds a fantasy image that Ford could only hope for in its wildest dreams.

Although Top Gear apparently started out doing serious car testing, they have gradually gotten into more faked and thus more exciting simulations. I guess they found that this was the way to increasing the number of viewers.

One viewer apparently missed the old style road tests, and wrote in asking to go back to real car testing, which inspired Jeremy to do this totally over the top "serious" mock road test of the Fiesta.

So instead of seriously considering the power, fuel efficiency, space, reliability, speed etc. in comparison to another car, Jeremy sets up a series of exaggerated so-called tests that are faked to show off the best aspects of the Fiesta. Luggage space? A stuffed Zebra head happens to fit exactly in the back, and so that is judged excellent. The Fiesta is small and maneuverable, so he stages a chase in a Mall against a much larger and more powerful Corvette. I believe it is possible that the Fiesta would win, given the slippery floors and extremely limited space. But the whole fake chase was scripted and choreographed like a Hollywood movie. And he should have put the Fiesta up against a Honda Fit or a Toyota Yaris. And finally, nobody drives in a mall anyway. Of course we all knew that, didn't we? especially the last one.

But Jeremy was not finished yet, the Royal Marines beach landing was next. The Fiesta went off the landing craft and was immediately over the "bonnet" in salt water, nose down. That apparently didn't kill the unsnorkeled engine. Also, the front wheels with regular street tires on them had no problem finding traction on the mud or sand under the water, and the Fiesta plowed its way, apparently with no help, up onto the beach. I have driven on beaches at times, and I would not try that. The beach above the water line seemed hard packed enough to drive on, so that part was credible, but not the part under the water. In fact, if the Fiesta could drive through the water, we would have a whole new class of amphibious assault vehicles being tested right now.

The real outcome of the test was probably at least one written-off green Fiesta. And if they did, I'm sure Ford would be happy to write it off. We are not told if they have paid any other money to make this show, but really I would not be surprised.

Picture from this blog, that mentions the Marines came up with the idea, and specifically mentions they understood the show as comedy, not a serious test. It does not mention that any spectators were allowed to watch. I figure either a tow rope, or an underwater ramp would do the job, but I was not able to find any confirmation.
http://www.fquick.com/blog/Jeremy_Clarkson_drives_Ford_Fiesta_into_Sea/2506
Copyright the Lost Motorcyclist