Movie "Death of a President" was Not a Death Threat 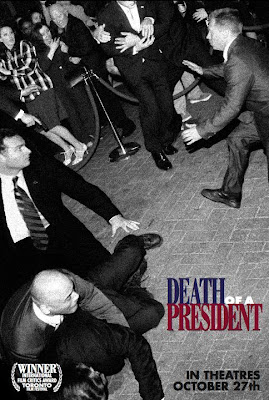 With the recent murders and assassination attempt, the use of violent political rhetoric is being questioned by some people. The movie, "Death of a President", has been mentioned to me as an example of left wing death threats against Bush. Presidential death threats are in a class by themselves, because they are illegal (I think), and because they are not part of the usual political campaigning. But I will still take the time to compare this movie to the current violent political rhetoric which includes veiled death threats and gun references.

Out of curiosity, I Googled "Kill Bush" (images only) and got 8,180,000 hits. Judging from the first page, I'd say pretty violent stuff. "Kill Obama" had 17,800,000 images. If you are looking for threats you will find them. In case you were wondering, "Kill Myself" had 14,200,000 images on Google. Looks like people don't hate themselves as much as they hate Obama, but hate themselves more than Bush (and that would include Bush I and II).

"Death of a President" came out in Canada on 10 September 2006, at the Toronto International Film Festival. I saw the movie myself, soon after, also in Canada. It was released a month an a half later in the USA, to a limited number of theatres, (143 screens) on October 27, 2006. It grossed less than half a million dollars in the U.S. How many Americans saw it, maybe 50,000?

At that time, I did not get the impression it was a left wing death threat, other than the inflammatory title. Yes the title itself was a problem, even though it didn't name anyone or any country, even though it could have been a heart failure. And I'm really surprised that the movie was even shown with this title in the USA, as often titles are changed if they are even a tiny bit offensive in certain countries. And this film went under several different titles. It also had several different posters of more or less inflammatory effect. I don't know which poster was in the US, or Canada, but the picture I show here is the one I thought was least offensive.

This movie was not made in the USA, and even if you insist that this was a death threat (I don't think so myself), I actually didn't know that threats made to Americans by people in other countries were included as "left wing attacks on America". They should not be.

I do not know if the censors who let the movie into the USA were left wing or right wing, but they probably watched the whole movie, then decided it was not a threat, no matter what the title may have said.

If the assassin was actually an Arab Muslim terrorist, does that make this movie a left wing threat? Or is it more a terrorist threat, or are they both about the same. Actually the movie is like a murder mystery with a surprise ending, so I'm going to leave it at that.

The movie did not negatively portray George W. Bush. This movie did not portray the left winger protesters or assassins as heroes. They actually came off as being crazy. The movie showed an outcome for the country and the world that was actually worse than if Bush had lived.

Did this movie have the effect of increasing the general hate against Bush? I never saw anyone show up for a Bush rally packing loaded weapons, like they did with Obama. Yes, Bush was hated, but this movie did not have anything to do with that. That was partly due to it's limited distribution in the US, of course.

Finally, yes I thought it was a good, and thought provoking, movie. (The thought being OMG Don't anyone kill Bush!) We hardly saw anything about the assassination. It was more a what-if scenario "What would happen to the world if Bush was gone?". It had a lot of interesting ideas of what might happen, and none of those were appealing. Especially Dick Cheney taking over. The movie should actually have been called "What if Dick Cheney was President?"

Here's a guy who really hates this movie. He also seems to agree there is no implied threat to Bush.
http://illinformedgadfly.com/?p=93

Here is a guy who thinks this movie is a leftist propaganda attempt, that it will in fact encourage crazy leftists to try and assassinate Bush. But he has spoilers in his review, and tells who committed the murder. Oh, who am I kidding. Nobody is ever going to see this movie who has not seen it already.
http://markhumphrys.com/cinema.anti.reviews.html
Copyright the Lost Motorcyclist