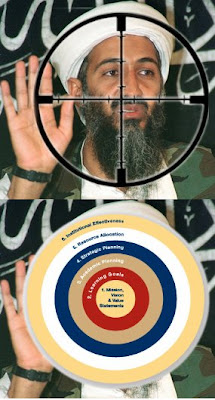 The conservatives have scored a hard counterpunch in the blame game about the shooting of Gabrielle Giffords. On this right wing site, you will find out that Daily Kos, a left wing website, had previously put a bulls eye on Gabrielle Giffords, long before Sarah Palin put a "Surveyor's Target" on her.

In my opinion, Sarah Palin's rhetoric was far more inflammatory than KOS, if that counts for anything. It was quite a stretch to compare the KOS article to gunplay. There was a huge difference between the Daily KOS Bullseye and Sarah Palin's. I'm going to list some of the differences here, if only for people with am interest in propaganda.

Sarah was talking of an opponent, not a friend or an ally, like KOS was.

Without the picture of a bulls eye, the words bulls eye also happen to mean "the precise accomplishment of a goal or purpose". In context, it was pretty obvious that this was the intended meaning for KOS. http://www.thefreedictionary.com/bull's+eye

Everybody knew those were crosshairs long before the shooting. Even though after the shooting, Sarah's camp said the crosshairs were actually a "surveyor's scope". But Sarah earlier tweeted about her crosshairs icon, calling them a "bullseye" on Nov. 4th. Is it worth mentioning the difference? See the picture: Cross hairs are see-through, and are used to aim at the target, a bulls eye cannot be seen through, and it is the target. Anyway, she should know the difference between the target and the sight. http://twitpic.com/3ofie7/full

Tea partiers often bring loaded guns to political rallies, and use the language of guns in their rhetoric all the time. Liberals are usually unarmed at political rallies. The reference to guns on Palin's web entry was obvious to all.

Gabrielle herself said long before she was shot, that there would be consequences of being in Palin's crosshairs. Gabrielle did not mention the KOS "bulls eye", either was not aware of it or apparently did not consider it to be threatening or intimidating.

Maybe I could find a few more comparisons, but does it make any difference. This is not a debate. It's a propaganda war, and most of the heavy artillery is on the right wing side (to use a violent military metaphor.)

The right wing Christians (who back Sarah Palin) have been able to accomplish the amazing (to me) feat of twisting Jesus's words around to make him into a warmonger. By comparison this little shooting should be easy for them to turn around until the Democrats are back on the defensive.

Picture: Which is the bulls eye, which are the cross hairs? And which are best for targeting someone? We should also remember that Jesus wants us to kill Bin Laden, not Gabrielle Giffords, which is why Canada sent it's troops to Afghanistan and not Arizona.
Copyright the Lost Motorcyclist