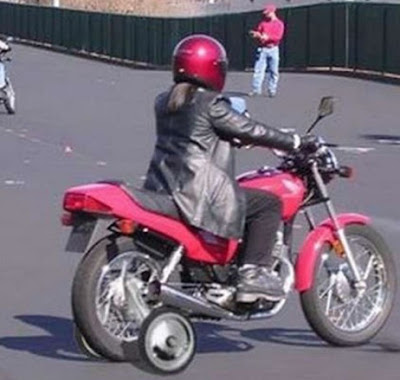 This is about new riders and old riders going for a ride together, not about the parking lot training phase shown in the (possibly photoshopped) picture. I am writing about going for actual rides in traffic, with new riders. I have rarely ever seen a magazine article deal with this subject, and I don't blame the writers. Its a topic where the writer can easily come across as boastful, or arrogant. But there is no denying that I have had 40 years of riding experience, and if I go for a ride with a new rider with almost no experience, there will be certain expectations, and there is of course potential for devastating consequences. So I am going to write about it because I have no boss, and few readers to annoy, and I like writing about taboo subjects anyway.

On any group ride there are things to watch out for. But a big disparity in experience levels can provide extra problems and stress.

Once, I suppose, I used to be a beginner. It's harder to remember stuff from long ago, and when I was a beginner, I did not often ride with other experienced people. But over the last ten years I have had quite a few opportunities, as an experienced rider, to ride with people who are just starting out in motorcycling for the first time. So I will write this from the point of view of an experienced rider only.

Experienced riders sometimes forget what its like to be a beginner, and what allowances to make. Furthermore, all beginners are quite different, and you never really know what to expect. That brings us to the first thing to be aware of in a beginning rider. You really cannot know what to expect. For example, a beginning rider may be very good at cornering, but very bad dealing with cross winds. Just because a beginner is good at something, do not assume they are able to deal with every situation. An experienced rider usually has seen just about everything and can deal with it. Inexperienced riders may cope well with some things, but may have never experienced others.

Speed is a well known issue when two or more motorcycles ride together. I will assume that all the riders know that in a group ride you do not attempt to overtake one another except in an emergency, or to pull over. Beginners usually tend to ride slowly. Others may sometimes ride too fast. Experienced riders are more likely to fall in with the average traffic speed. That's why usually you do not put the beginner in front. So even though you may be a very fair person, who does not want to be bossy and a know-it-all, you probably should volunteer to go in front, where you set the speed, especially at first, and in difficult situations. And you need to be aware of the comfort level of the beginner, in dealing with the speed. You might need to encourage them to go faster if a line of cars is forming to the rear, trying to overtake. You could possibly remind them of something most experienced motorcyclists know, which is "motorcycle speedometers tend to have about 10% error on the high side". You may be going slower than your speedometer says. And don't go too fast. Just fast enough to avoid collecting a tail of frustrated car drivers, which can lead to a dangerous situation. On the other hand, if the beginner is in front and goes too fast, you don't have to match their speed. Go as fast as is reasonable, and the next time they stop, you can discuss the situation. In the mean time they may get completely out of view up ahead, because beginners don't check their mirrors often enough. (to be honest, I don't either. Just something else to be aware of)

Another thing to be aware of is that just because you have 40+ years of riding, compared to three weeks, your beginner friend may have a few things to teach you. That makes it even harder, because most of the time, they are wrong and need to be set straight about something. It's actually pretty confusing. Let me give an example. Riding with a new rider for several days, I found he was checking the tire pressure all the time. He wondered why I was neglecting to check my tire pressure. Well, sure enough I do sometimes neglect my tire pressure, and maybe I should check more often. Like before I start a trip. And if the pressure is OK, maybe once more after several days of riding. That's what I would call adequate, and in fact anything more than that and you may be asking for trouble. Like when you're checking air pressure, a bit of dirt gets wedged in the valve and sets up a slow leak. Or each time you check the pressure you lose some air, then you have to go to a garage to get it pumped up and the free air dispenser has a faulty pressure dial. Or you drive over a nail near the air pump and get another slow leak. Anyway, given the frequency of this problem, I know that you do not need to be constantly checking the air pressure. But technically this beginner is right, it says in all the owners manuals, and you are taught in the courses, to check tire pressure every time you get on the bike.

Something I don't like about riding with new riders is the worried looks I get from spouses or parents. This does not happen when I ride with experienced riders, for obvious reasons. It's not a safety issue, I just wish I didn't feel that additional pressure. So I try to not get involved in domestic disagreements in whether they should be buying a new motorcycle or going for a trip. By "try" obviously, I don't get involved in the actual argument. I try to not even arouse suspicion that I may be the one leading this person astray, which is tough to do with some extremely suspicious wives. Even if their spouse's case of motorcycle fever had nothing to do with me.

Although some people might, I don't like to act as an official "mentor" to a new rider, unless it happens to be a family member. I probably would enjoy the occasional ride with this new rider, but I would prefer that they also ride with other people, or alone, or with a club. That way, they develop their experience faster, and I am more comfortable with the situation. Also, I am one of those people who really does enjoy riding alone as much as riding with other people. Here is an article about mentoring.
http://www.womenridersnow.com/pages/story_detail.aspx?id=2524

Here is a list of things that come to mind, a partial list of problems that have come up riding with other people. Fear of wind, rain, gravel roads, cold, freeways. Issues with butt burn, worry about mechanical problems such as hot engine, leaking fluids, tire pressure, not wanting to go overnight, not liking ferries. Taking medication that causes drowsiness, getting lost, luggage falling off, running out of gas, and running red lights. And yes, sometimes the problem is me.

Picture: If it is photoshopped, I was not the one who did it. http://www.guzer.com/pictures/motorcycle-noob.php
Copyright the Lost Motorcyclist