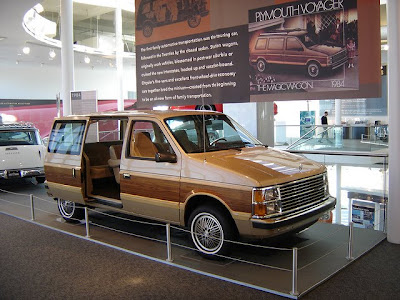 Back in 1984 I bought a minivan the first year they came out. It was a Plymouth Voyager, and it had a 2.2 litre engine. I ordered it with a manual transmission for fuel economy, and extra performance, but it was still not really fast or particularly fuel efficient. Its best features had to do with kids, and I had three of them. No door on the street side, so no danger of kids jumping out the wrong side. The sliding door also meant no danger of dinging the car beside us when they piled out of the van in a mall parking lot. And all three had their own window seats, with little opportunity for poking each other during the drive. Finally, it fit in my garage, and in our fairly short driveway. Chrysler called them "Magic Wagons" and they were indeed magic.

I was aware from the start that the minivan did not cut a dashing image out there on the streets. This was never going to be a classic car. James Bond agent 007 was never going to be seen outrunning Russian spies in a minivan, or even seducing the ladies after driving them at scary speeds on mountain roads in the French Riviera. But it was not important enough to give up the practical advantages for the fantasy. However, owning the minivan may have helped later to push me into the decision to buy a motorcycle with six cylinders, as a way of overcompensating.

This morning, I saw a CBC report on minivans in the morning news. "Will Minivans Ever Be Cool Again?" My first thought actually was that the CBC was cutting corners by running a canned piece from a Toyota ad agency. I noticed it was mainly about a new Toyota Sienna ad featuring a Mom and Dad and two kids, with the Mom and Dad doing a rap music video, and saying they called their minivan a "Swagger Wagon". Further mention was made in the video that another maker was calling their minivan a "people mover" and another was calling it a "Man Van".

No matter what they call the minivan, they are going to have a hard time shaking loose the image. These are vehicles that parents buy to drive their kids around in. Even if a young person (say up to 25) bought one of these, everyone who saw them would immediately assume that they were driving Mom's car because they still lived at home and went to school, and they didn't have a car of their own.

I thought it was also significant in the video that the family had two kids. Many years ago, 8 would have been the norm, then it gradually dropped. Two kids is a respectable number these days, and I expect one day the norm may even go down to one. Minivans make most sense for bigger families, (3 kids or more) while apparently families are getting smaller.

I think the cool car today is the SUV. Instead of your vehicle saying "I'm driving Mom's car because I live at home" it says "I live on a mountain top in the Rockies where I shoot moose and grizzly bears, and this is the only way I can get home."

The facts, of course are totally different from the image. Although granted, occasionally I see somebody driving an SUV who actually might fit the image. For example, one person I met had an SUV because he had to drive up a luge track to get to his house. Most people have paved driveways.

I don't know if this ad campaign is aimed at me, but if it is, it is a failure. I have seen many ad campaigns that turned me off over the years, and this campaign also has the effect of making me want to never buy another minivan. "Man Van" and "Swagger Wagon" are horribly embarrassing. Rap music is something I have never had the slightest feeling for except disgust that it ruins real music for everyone.

I have not had a minivan since I got rid of the Voyager back in 1996, I bought a Honda Civic with good gas mileage and sporty performance. That was after the kids had basically moved out, or at least I didn't have to transport the gang around with me. After the Honda Civic I bought a Toyota Matrix because the higher door and seating position makes it easier for my increasingly creaky bones to extract themselves from the car.

The last time vans were cool with kids was the seventies, when they were "Shaggin Wagons". If you drove one back then, everybody still assumed you lived at home, but at least you had your own vehicle, and a girlfriend or a shag rug.

Minivan sales are down from over a million in 2000, to under half a million today. The marketing people are going to have to try harder to come up with a winning concept. Let me throw this one out for them, since they are having such a hard time. Promote the idea that driving a minivan makes you lose weight. According to a recent health survey, Canadians apparently think driving the kids to a hockey game is a healthy activity. I know it's not true, but in marketing, you have to go with the flow. Work with the subliminal messages. For example show fat people walking to work and playing hockey, intercut with fit thin people driving minivans. Now there's a winning idea in sales campaign. Remember you sell the sizzle, not the steak.

Picture: I am surprised to see a 1984 Plymouth Voyager in a museum. Mine was the basic model with no wood grain panelling, without even a right side mirror. (each outside mirror was $70 extra) In those days the 401 had only two lanes, who needed a third mirror? But I did need a third row bench seat, and that was $800 extra. http://www.flickr.com/photos/harry_nl/3039372888/
Copyright the Lost Motorcyclist