Biker Gangs Are Not Motorcyclists 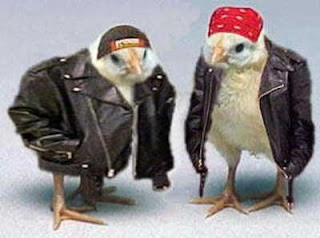 Why do all motorcyclists get tarred with the same brush as these criminal gangs? It's a topic I have touched on before.

A few years ago, there was a "biker-on-biker" mass murder near Shedden, or Dutton Ontario where my mother lives. I noted that no bikes were actually involved in the murder, or found near the scene of the murder, but the headlines still screamed "Bikers Commit Mass Murder". Why then, when everyone involved was in a car or truck, were bikes mentioned at all? Apparently, they were still a "biker" gang, because in the mind of the public the original reason for their gang membership was the ownership and love of riding motorcycles.

Now finally on the 30th of July, 2009 comes this statement under oath from a witness in the murder trial.

"Court earlier heard that men hoping to join the motorcycle club didn't actually have to own or operate motorcycles.

Bryant noted that his client, Marcelo Aravena, 33, of Winnipeg, doesn't own a motorcycle or even have a licence to ride one.

"This was a bike club with no bikes?" asked Bryant, who is in his third day of cross-examining M.H.

"Pretty much, yeah," replied M.H., who was a member of the Winnipeg Bandidos and didn't own a motorcycle himself. The trial continues."

At long last we can stop calling these folks "Bikers" and "motorcyclists" Here are some replacement labels for reporters and journalists: "alleged murderers" "gun owners" "beer tasting gangs" "drug pushers". Choose whichever is most appropriate before you pick on motorcycles.