Can a Bicycle Save Gas? 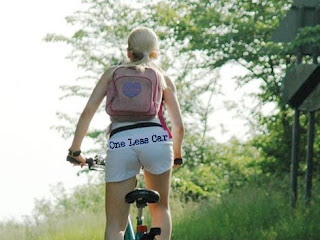 I should not be surprised at any of the propaganda attacks on environmentalists, but I still am, occasionally. I came up with this one from the Times of London. It's usually an OK paper, but like most papers needs to drum up interest by a shocking or silly story from time to time. This is an opinion piece by Leo Lewis, a guest contributor. It is titled "Get a Bike, Save the Planet (in 87 years)"

"a bicycle, runs the sales patter, will save on the daily cost of a commute, produces no CO2 and is environmentally non-rapacious. All compelling, but sadly, all false."

Leo may be a credible journalist, and he may in fact be telling the truth when he says he tried bicycling, and concluded that he saved only 90p a day in Tokyo traffic, covering 16 km total per day. But he did not credibly prove any of the three statements were false. He simply got wrapped up in a lot of vague thoughts about his bicycle helmet needing to be transported from Malaysia to Tokyo, and then added in, not only a bottle of green tea, but the cost of the disposable bottle because he was thirsty and would not have needed any of that with a car.

In his efforts to make the point he simply ignored any of the possible "back story" the car would involve, and I am pretty sure making and maintaining the car created a greater impact than making the bicycle.

And finally, he did not consider health issues due to bicycling vs. car driving, parking problems, pollution of driving the car, and came up with what appears to be an entirely bogus number of 87 years to begin to reduce the environmental footprint by bicycling. Just a quick reality check - according to him, the car costs a minimum of 90p petrol per day, so I'm going to figure in Canadian dollars saving about $400 per year in gas, never mind parking in Tokyo. (and never mind the fact that your 16 km/litre is ridiculous for a Nissan Skyline). Anyway, I can get a bike and helmet, and wash extra shirts, for less than $400 in one year alone. And in 87 years I'm going to be ahead by at least $32,000 (Canadian). As far as the extra banana and ice tea per day, I don't know what those might cost in Tokyo, but I know that I would be eating and drinking anyway, just because I like to, and I would rather not get obese, so the bicycle is going to save me a lot of money.

Now there may be some Tokyo things I don't know, like do they have a winter where you can't drive a bike? Then maybe I have to use the car or public transit, or maybe I can get a used bike and not wear a helmet. But I think Leo's argument will impress some anti environmental people I know, and I'll be hearing from them soon enough on yet another email "send this to all your friends to warn them against using gas wasting bicycles."
Copyright the Lost Motorcyclist