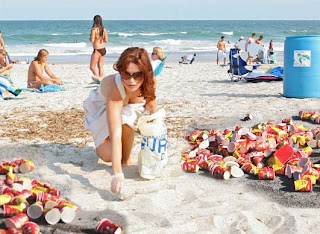 It's Canada day, and while most people would write about Canada's ethnic diversity, or scenic beauty, my mind turns to thoughts of litter. Not because Canada has a lot of litter, which it really doesn't, but because of a road trip in the summer of 1972.

It was my first time driving across Canada, and I was going East, from B.C. to Quebec. I had been away from Canada for three three years, living in Sierra Leone, where they have even less litter than Canada. There were no Tim Horton's drive thru's in Sierra Leone, and little or no excess packaging. In fact almost no packaging of any kind. If you bought a watch, you bought only a watch, no case. There was nothing to throw away after any purchase, not even the price tag. Actually deciding on the price would have taken most of the effort in making the purchase. Almost nothing you would throw out in Sierra Leone would be considered litter. Little bottles, tin cans, and pieces of paper all had some use. Even the beer bottles were returned to the bottling plant for re-use. Yes, I know we do this in Canada, but in Sierra Leone, you could tell those bottles had been re-used hundreds of times from the scratched surface on the outside of the bottle.

So, back in Canada, and my first visit ever to British Columbia, and there was a sign I had never seen before. "No Littering. $2000 fine". That was quite amazing to me, as coming from Quebec I did not recall such a draconian law. Then we set off for the East, and as we crossed into Alberta, another sign greeted us. "$1000 fine for littering". It seemed to me you could save a lot of money by throwing your trash across the border from BC to Alberta. Then Saskatchewan seemed to be trying to outbid the other provinces by offering to let you litter for a mere $750. Next came Manitoba, and at that time they had a great littering campaign where they would put your trash in orbit for a mere $500. At every roadside stop, there were these litter containers in the shape of a sputnik satellite where you could put your trash, and then it would be supposedly sent into an orbit around the Earth, but of course these days we realize what a mistake that was. Now we have thousands of bits of trash orbiting the Earth, but back then it was kind of a novelty.

On to Ontario, where I was just waiting to see what they did with the litter, and was kind of disappointed that it was only a mere $100 fine, and boring trash cans. The slogan on the Ontario licence plates was "Keep it Beautiful" which I took as another reminder to not throw trash around.

Finally after three days of keeping it beautiful, we reached Quebec. There were no signs about trash. And sure enough before long, as we followed a car down the Trans Canada highway near Montreal, a whole garbage bag full of trash was flung out the car's window and bounced a couple of times on the shoulder before it broke up and a litter explosion filled the air.

Things have changed a lot since then. For one thing, Quebec now has its own litter Nazis like everyone else. Back in 1972, the worst litter was dog poop and cigarette butts. Today, there is a lot less smoking in public, and people generally pick after the dogs. But now we have a new form of litter that has taken the number one spot. Tim may argue with me, but I think it's his paper cups. And to make it worse, some people order double cups, and even if they get their coffee in a china mug, they get an empty cup to play "Roll up the rim".

Another phenomenon that we have today that was unthinkable in 1972. Now people pick up other people's litter!!! We have park cleanups on Earth day, and volunteers keep parks clean.

P.S. In case you are outraged by the picture, I will confess it is fake. After I hired the model I couldn't find any place on the beach with any litter, so I just had her pose as if she was picking up something and then photoshopped in the cups later.
Copyright the Lost Motorcyclist