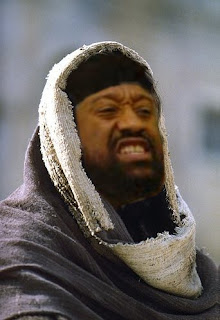 When I attended Bishop's University I was required to take at least one course in religion or "Divinity" as they liked to call it. Finally now I can make some use of that course.

I wanted to find out why the "warlike" Jesus has been popular with fundamental Christians. To me, it seemed "Warrior Jesus" was an oxymoron. Not only that, but I had always thought the message of peace and tolerance of Christianity was it's main selling point. I found out I was wrong. And along the way, I found out why Christianity became the official religion of the Roman Empire.

If you were to do a survey of Christians, you would find that the main attraction of Christianity less peace and tolerance, and more that you are only required to believe to be saved. Which means just stop thinking for yourself, which is actually very easy for most people. I would call it human nature to prefer the easy and simple over the hard and complicated.

Knowing that the key concept of Christianity is nothing more than believing, helps to explain why Christianity spread so far and wide. And second, it explains why many Christians have never felt a strong need to actually follow the teachings of Jesus. They can get away with doing a lot of stuff while still being saved. Apparently Christians can torture people without worrying about going to hell, as long as they believe in Jesus without questioning. Those are the religious priorities, and it's why the argument "Who would Jesus bomb" gets only blank stares in reply.

Why did Christianity quickly surpass the pagan religions? After all many of them pre-dated Jesus, and coincidentally had many of the same concepts. Early pagans often accused Christians of copying their gods. Especially stealing the story of the birth of their Gods, the dates of their holy days (Dec. 25 and Easter), the stories of the virgin birth, the death and Resurrection in three days at Easter etc. The Christians in turn accused the pagans of using their friendship with the devil to gain advanced knowledge of the story of Christ and therby pre-emptively plagiarise the Christians. So the claims of plagiarism kind of back fired on the pagans.

One thing that the Christians did very well was to tell a realistic story. Most of the Pagan god stories were kind of generic, events could have taken place anywhere, any time, as fairy stories often do. But the story of Jesus has places that actually existed (Bethlehem Jerusalem Galilee), and names of historical people (Herod and Pontius Pilate), and real dates (0 A.D.). It was even told from several different points of view, all of which pretty much agreed with each other on the main facts. I don't claim to know if Jesus was real or fake, but there were more realistic details in the story of Jesus than any of the pagan Gods such as Dionysus, Osiris, or Mithras.

Realism is a sword that cuts both ways, however. By not having specific towns and dates, people can easily imagine that their God is just like them, born in the same country or province, speaking the same language. By naming places, you would think you could alienate people who are not from that country. By placing Jesus in Jerusalem or Galilee, suddenly he becomes a Jew, and speaks a foreign language. This may turn off a lot of people. I'm sure the supporters of Dionysus were afraid that if they named the Greek city Dionysus came from, that they would lose the support of all the other Greek cities as they all hated each other with a passion. This would be true whether or not Dionysus was a real or mythical figure.

Well, I guess I'm not spoiling the surprise to say the gamble paid off for Christians, and today you find Jesus has been accepted everywhere as one of the family. It might have worked because without television nobody know what he looks or sounds like for real. Even the Nazis had no trouble believing Jesus to be a blond haired blue eyed German who just happened to be born in the middle east to a Jewish mother. So the trade off between generic appeal vs. realism was worth it for Christianity in the end. And of course, the Romans, as well as Americans, Spanish, Germans and English had no trouble at all interpreting the supposedly "peaceful" nature of Jesus to their needs.

But I'm guessing that if the supporters of Dionysus had been able to get their hands on a picture of Jesus looking like the one above, today we might all be Dionysians.
Copyright the Lost Motorcyclist