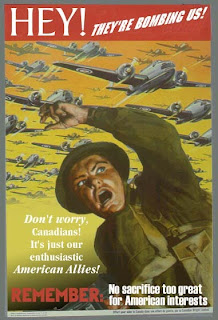 Some people may nitpick at President Obama just because he is the Antichrist and he is trying to destroy America with socialism, and because he is the illegal immigrant who became president under false pretenses. Even in Canada, MacLean's Magazine had an article about how bad Obama was for Canada.

But I think we should also try to look at the silver lining of his presidency. First, gun sales are way up. If you are a gun dealer, especially in assault weaponry, you are laughing all the way to the bank (which by the way just collapsed).

Secondly, I just want to remind Canadians especially, how much the mood in America has improved towards us. We may have already forgotten the anger of the Bush years towards Canada, and I don't just mean the illegal softwood lumber tariff. Also, I am not talking about the fact that our first five Canadian casualties killed in Afghanistan were actually bombed by Americans.  (Ironic, given Jonah's argument)  Or the official snubs of the Canadian representatives in Washington, or the US ambassador to Canada lecturing us on how to be good friends to America.

Back in 2003 was a time when American rhetoric against Canada was at a high. Does anyone remember the article in the conservative "National Review" by Jonah Goldberg, "Bomb Canada: The case for war". Of course, you think, it was satire. Well except for the fact that conservatives do not have a sense of humour you could be right. In fact I did read through the article again to see if I could detect any sign of self deprecating humour, but no.

The argument seemed to be that Canada needed it's big loving brother (The USA in case you couldn't guess) to slap it around a little to stop it from being a wimp and get out there and fight for freedom. As the USA had done before, to Canada's great benefit and everlasting gratefulness in 1812.

The specific details were like this: The US Air Force would go in and bomb something like the CN Tower or an empty hockey rink, following which the Canadians would rise up en masse and demand that their government increase funding for the military, and every able bodied man would volunteer to join the armed forces. Then the USA would apologise, saying something like this. Boy, did we ever mess with the wrong people. We're so sorry, we thought you would roll over and play dead when attacked. Now that we can see how tough you are, let's be friends again and go beat up on Iraq together.

If you want to read Jonah's "Bomb Canada: The Case for War" article try this link
http://www.freerepublic.com/focus/news/800108/posts   [Link updated on Nov 28, 2013 as the original link disappeared.]


In October 2006 Jonah finally wrote that invading Iraq was a mistake, he called it a "noble" mistake. But his attitude towards Canada didn't seem to change much. Jonah Goldberg wrote a bit of a followup about Canada in June 2006, judge for yourself whether this has a tone of humour or apology in it. It was called "Bomb Canada and behead her Prime Minister", an even less appealing title than the last one.


"Canada is arguably the most deluded industrialized nation in the world. Because elite Canadians think the U.S. is the font of the world's problems, they think being different than the U.S. and sucking up to the United Nations will buy them grace on the cheap."


Speaking of deluded, I was just thinking that this article itself symbolises how deluded the right wing extremists were and still are in the United States. They have an unshakable belief that they are the "font" of all the world's freedom and democracy, while stealing elections, toppling democratically elected governments, declaring war pre-emptively, and torturing prisoners to "get valuable information." And deluded enough to think that by "slapping people around" you gain their trust and cooperation.

You know, only the most deluded of the delusional could even dream up this fantasy, where the US bombs Canada and that wakes up the Canadians and makes them realise how much they love America, and want to fight and die for it. It is deluded because first, to think that Canadians hate America is already delusional. Canadians love America, considering our history. It's just that we are a sovereign country that does not vote in USA elections, and so we make our own policies. In fact IF we voted in the US elections, there would be no president George W. Bush, and for sure no second term for president George W. Bush. The Fundamentalist Christians would not be running the USA, because Canadian voters could tip the balance, just like having another California or another New York, except even more liberal and secular.

And secondly, the rest of the world also basically loves America despite all its flaws, and remember, we all have flaws. Only the truly delusional think they are perfect. But of course that international love diminishes as America proves itself to have delusions of world domination, involving the aforementioned wars of aggression and torture, and just plain slapping people around until they love you. If the international community turned away from America because of the war in Iraq, I can only imagine what a little bombing of Canada would do for them. How long do you think, for example, it would take for the Europeans to come up with an alternative world reserve currency?

Look, maybe there are reasons why Americans, particularly southern Americans think that slapping people around works. After all slavery seemed to work just fine base on this principle. Oops I forgot, Jonah said Canadians should stop talking about the slavery thing. Actually, Canada had its own slaves. And every time the underground railway arrived in Canada with another load of escaped American slaves, Canadian slaves hopped on board to escape Canada for the freedom of the USA. (now that is humour, because although Canada did really have slaves, very few, if any, tried to escape to the USA, because they loved our cool climate so much. That and the fact that they could only pick cotton about 2 months a year.)

And finally a little History lesson for Jonah, who by the way hates the French even more than the Canadians. He said "Canada was founded largely by loyalists who rejected America's rebelliousness toward King George.".

Jonah, this is the way Canadian loyalists see it, the Loyalists were original Americans who were driven from their homes in America by the same rebels who sided with the French against their own government. They found refuge and started over in Canada after losing everything. In Canada, these displaced once-loyal Americans intended to continue their lives in peace, called themselves Canadians and stubbornly resisted the efforts of the "Americans" to invade. If American leaders at the time knew anything about history, there probably would not have been an ill conceived invasion in 1812.

So let's rewrite that quote to "Canada was founded by loyal Americans who were driven from their own country because they refused to help the French defeat the English in the war of independence." And even that is not completely right as you still have to remember Canada was also "founded" by the French Canadians, and the Inuit and original inhabitants, and other immigrants.
Copyright the Lost Motorcyclist