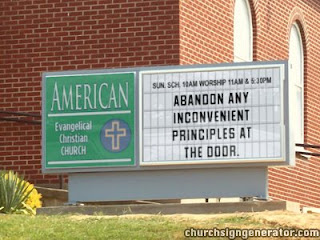 I have mentioned several times in my blog, that some Christian churches have roots back to the slave owning south, and those churches back then justified slavery with all same logic that they defend their political views today.

I can understand that slavery is over, the churches have all apologised more or less. But I keep bashing away because many of the same churches today are still stubbornly anti-Christian in their beliefs and activities. For example, these southern churches still support a war of aggression, 60% of churchgoers support torture, right wing Christians are emailing chain letters promoting a holy war against all Muslims and supporting the Israeli's invasion of Lebanon, Gaza, and potentially an upcoming bombing of Iran. Pat Robertson publicly calls for assassination of a foreign leader, and supports Charles Taylor from Liberia. Now Christian Television Network is saying that Barack Obama has fundamentally rejected Christianity when he answered that people may be rewarded in heaven for doing good in life. Many ministers argue Jesus was pro-war, while telling me I am evil and going to burn in Hell forever for my pro-peace attitude. So, excuse me while I continue to expose the racist and pro-slavery roots of these aberrations of Christianity. Here is a little more historic perspective on this situation.

Slave owners in the Southern USA turned to Southern Baptists and Christian Evangelicals as the preferred religions to provide divine authority for their torture of slaves.

Not all religions are bad. Some religions are genuinely good, caring for the needy or preaching tolerance and peace, and asking nothing in return. Other churches may have a goal no more than simply expanding their membership, or becoming wealthy. Some are focused on electing a religious ruler in order to either avoid being persecuted, or so as to allow them to enjoy the freedom to persecute others.

Here are some links to the particular forms of Christianity that were used to enable abuse of the slaves under the protection of the Lord God.

George Whitefield, the "Father" of Evangelism, a slave owner himself, campaigned to have slavery re-instituted in Georgia in 1751.

Quotes from Wikipedia about Christianity and slavery below:

The 18th century evangelical protestant Society for the Propagation of the Gospel in Foreign Parts owned the Codrington Plantation, in Barbados, containing several hundred slaves, branded on their chests with the word "Society"

The Quakers in particular were early leaders in abolitionism, attacking slavery since at least 1688. In 1787 the Society for Effecting the Abolition of the Slave Trade was formed, with 9 of the 12 founder members being Quakers; William Wilberforce, an early supporter of the society, went on to push through the 1807 Slave Trade Act, striking a major blow against the transatlantic slave trade. Leaders of Methodism and Presbyterianism also vehemently denounced human bondage[107][108], convincing their congregations to do likewise; Methodists subsequently made the repudiation of slavery a condition of membership[1

In the southern United States, however, support for slavery was strong; anti-slavery literature was prevented from passing through the postal system, and even sermons, from the famed English preacher Charles Spurgeon, were burned due to their censure of slavery[110]. The Bible was used, and manipulated, to support the institution of slavery and inhumane practices; crimes such as murder were seen as justifiable, if the victims were black. When civil war broke out, to settle the question of the limits of federal power, slavery became one of the issues which would be decided by the outcome; the southern defeat lead to a constitutional ban on slavery. Despite the general emancipation of slaves, members of fringe Christian groups like the Christian Identity movement, and the Ku Klux Klan (an organization dedicated to the empowerment of the white race), and Christian Reconstructionists still argue that slavery is justified by Christian doctrine today.

Frederick Douglass, a free slave, and great orator and abolitionist, remarked that slave masters clinging to the cover of "Christianity" were the most cruel. Douglass did point out that there was a big difference between the good Christians from the north trying to abolish slavery, and the cruel southern Christians. One of the quotes is particularly telling of the hypocrisy of these religions, selling off black babies to buy bibles.


In case you thought the Catholics were going to get off without criticism, here are some comments on religion and racism by the Claretans, a Roman Catholic community dedicated to social justice