Life, Liberty and the Pursuit of Ignorance 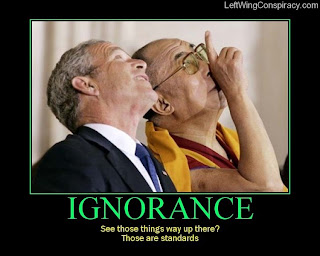 A famous quote is "Where ignorance is bliss, 'tis folly to be wise". It came from a poem by Thomas Gray, "Ode on a Distant Prospect of Eton College" 1742.

When I was younger I misunderstood what this was about. I thought it referred to a place where everybody was ignorant, and if an educated wise person went there, they would be better off shutting up about it, or they could end up in jail. Well now that I'm older, I see that's not exactly what Thomas Gray meant. He was talking about the ignorance of young people vs. wisdom of aged people. He is saying young people are happier without the wisdom that comes with old age. Not only the age related diseases, but disillusionment. It makes more sense, because everybody knows that with age comes wisdom, right?

But could my mythical country where everybody is blissfully ignorant, and intelligent people better shut up about it, actually exist? I think it might have existed at one time, even if it goes against all statistical probability. I mean what are the odds that millions of ignorant people would converge and live together at one time?

There are stories of Jones county, Mississippi that fought against the Confederacy, calling itself "The Free State of Jones"

The people of Jones county were obviously not blissful for their wisdom in opposing the majority of ignorant slave owners. Was ignorance bliss anywhere in the south before the civil war? If you were a southern abolitionist you would have been treated harshly, and widely regarded as ignorant. No matter how you tried to use logic and reason to defend your case against slavery, you would never win an argument, you would end up being called an idiot and deluded. Your logic would be like a tool of the devil, and your plain facts would be seen as Satan's trickery. Ugly rumours would be circulated widely about you. You would also be called a sinner against God, and a traitor to your country.

Yet one hundred and fifty years later, you would be vindicated and the entire south would have apologised for the error of their sinful and racist ways. But the wisdom against slavery did not come from the south, because the suppression of truth and wisdom was so ruthless. The more progressive ideas of equality had to come from the north, where plain truth and logic was respected. Where people were skeptical of proven liars, bigots and hypocrites. In the Northern USA, ideas of freedom and equality could be argued intelligently, and eventually people came to accept the truthful ideas of racial equality.

So it does seem like it is possible to have a significant geographical area where ignorance is in fact bliss and wisdom is a folly. Probably Thomas Gray himself never imagined such a place could ever exist.

Today, of course the southern USA has recovered, they have internationally respected Universities and colleges, free universal public education, unbiased radio and TV, unrestricted scientific research, and liberal intellectuals are welcome everywhere. People from the south have been elected as president, to serve with intelligence and wisdom that was widely admired throughout the world. What a difference a hundred or so years can make.
Copyright the Lost Motorcyclist