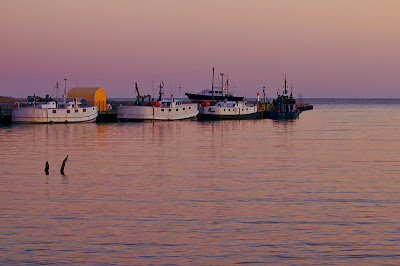 Port Stanley to Port Dover, Ontario is a good motorcycle road, despite some "problems". The first one being, there is no road. Instead, you need to navigate a confusing series of interconnecting roads, following the coastline. And even then you are not usually close to the lake. The problem with this coastline is that in many places it is eroding inland at a rate of about a metre a year, so it is impossible to build a road along the coast, and in places, where old roads have been abandoned, you must detour even further inland. People do not often attempt to build cottages along this stretch, because first the erosion problem, and next, the high clay cliff that overlooks lake Erie makes access to the beach difficult.

Considering the difficult geography, and complicated road layout, the route itself is very good motorcycling. Much of the rest of southern Ontario is fairly flat, and many of the roads are laid out in a square grid through farmland.

So, to us motorcyclists in southern Ontario, the route from Port Stanley to Port Dover has a few very welcome hills and curves. Unfortunately, most of them are in 50 kph zones, due to the geography. Some creeks run out to lake Erie along this shoreline, and each one has eroded a fairly deep valley as it approaches the lake. This is what creates opportunities for the road builders to get creative and throw in a few curves, with rapid changes of elevation. But these creeks are also the places where the various towns and villages are located, because these are also the just about the only places that it is worth while building on the shore of the lake. So most of the curves are in villages and towns. It's a bit frustrating, but the towns are also picturesque, and have beaches, outdoor cafes, and facilities. However, gas stations and Tim Horton's are sparse. But if you can hold on till Port Dover, you can get both.

I suppose a GPS might be useful here, but I don't have one. Although I have done this route many times, it still occasionally has thrown me off. But if I was doing it the first time, and had no GPS, I might just check Google maps first and write up a note card to slip in a map pocket.

This was a sunset ride. I started out from Port Stanley at about 8:00 PM, but because it was July 12th, the sun was still up, and better still, was behind me. With this angle of the sun, the scenery is also more dramatic, and it's a little cooler. Actually this is better than mid-day in many ways, but you end up in Port Dover when a lot of places are closed and people are going home.

In each coastal community, I drive right down to the middle of town, as this is the most interesting part, even though in most places, you need to double back to get on the road to the next place. The road rarely forces you to go through the beach/shopping/cafe areas of these towns. I start off with Port Stanley, driving right down to the beach where there is beach volleyball going on in about four courts, and people sitting around eating hot dogs or sitting at outdoor cafes. A lot of people are still in the water, even at 8:00 PM because of the heat. To get out of Port Stanley, I cross the lift bridge, and go up the hill across from the main traffic light. At the top of the hill is a confusing three-way stop, where I have to figure out that I need to turn left (the road ahead is marked "NO EXIT"), and that I am the only vehicle without a stop sign. There are three stops signs, with a car waiting for me at each one. Then I drive to the base of the Port Stanley water tower and turn right to follow the coast road to the next place, Port Bruce.

In Port Bruce, if you turn right, you can get to the waterfront park, surrounded by beach, canal, and some outdoor eating places. Just make a complete loop counter clockwise around the park and you will return to the main road, where you can take the bridge across the creek, and head for Copenhagen, where you can turn right toward Port Burwell.

The road to Port Burwell has many wind turbines. If you hate the sight of wind turbines, you might find this part of the trip painful. However I think they are about as beautiful as any other man-made structure I have ever seen, and a lot more appealing than some. So it's a plus for me, might be a deal breaker for you.

In Port Burwell after the bridge, I always go straight down to the beach, where there is a turnaround and a hot dog stand (closed at this hour). Then back up the road and turn right on 42, also Wellington Road, at the Lighthouse restaurant. Soon I end up on Lakeshore Road, heading for Long Point.

Long Point is 40 km long, and I do not usually attempt to travel down it. Instead I pass through the towns of Port Royal, and Port Rowan on the mainland. In the shopping section of Port Rowan, if I remember, (but I didn't this time) I make a right turn on Wolven Street, which will keep me near the lake. This time I just keep following 42 to the end, turn right, and I end up right back on Lakeshore Road anyway. Port Rowan does not have a bridge, being built near a sandspit instead of on a creek.

Next is Turkey Point, which is very easy to miss and is far off the road. But for me it's worth while and I do have a shortcut. Turn right at Turkey Point Road, turn left at the beach, and follow the road past the beaches and concessions until it says "No exit". Turn left and follow the road up the hill to the stop sign, turn right, and you are back on Lakeshore Road toward Port Dover again.

The road now goes through Normandale, Fisher's Glen, and Port Ryerse. I don't take any dead end loops in these towns, as the shortest way through is scenic enough for me. But coming out of Normandale, on Spooky Hollow Road after you are back on top of the cliff in farmland, don't forget to make a right on Front Road or you will end up back on 24 and miss the last bits of excitement before Port Dover.

Front Street takes you through Fisher's Glen, and once again, coming out of the village, you need to make a right on Front Road, or it's back to Highway 24. If you have a GPS, you will figure it out even though it seems unmarked by any signs. Otherwise, it's the first right after the top of the hill.

Now the same trick happens a third time at Port Ryerse, which is starting to get tiresome. I suppose that the road builders just don't like to encourage through traffic, but enough is enough. Anyway, leaving Port Ryerse, at the top of the hill, you need to make a right on to Port Ryerse Road, or you will end up back on highway 24. Once on Port Ryerse Road, continue to the stop sign, and turn right on Radical Road, which takes you into Port Dover.

Now it should be 9:30 PM and dark, but Tim Horton's and the nearby BB Gas Bar are both open. If you do get lost, there's always highway 24 to Simcoe. It's easy to find.


Picture: I forgot my camera, so Sunset at Port Stanley is from this website http://www.panoramio.com/photo/21062091
Copyright the Lost Motorcyclist