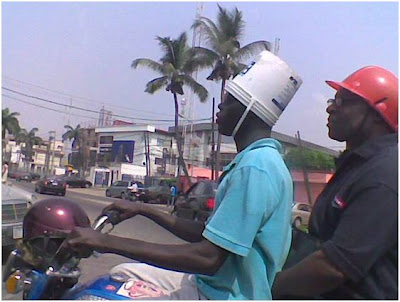 Helmets have become more than just a physical protection against head injury. They are at the centre of the controversy about laws requiring riders to wear helmets. And, in the minds of some people, they have become a sort of magic talisman to ward off accidents.

According to accident statistics, helmets prevent death from head injury in about a third of the cases. They work best in a collision where the speed and impact is small enough to be absorbed by the helmet, but large enough to cause death if the helmet was not worn. Also, helmets are pretty good at spreading the impact from a sharp corner (like a curb) to prevent it from cracking the skull. In case you didn't know, you can die from brain impact on the inside of the skull without the skull being broken. Helmets are also very good at preventing abrasion injuries (road rash) on the head, and with full face helmets, that includes the face as well. I don't know what the statistics are for brain damage on survivors, I suspect that is a lot harder to determine statistically.

The helmet industry is big business now, with helmets selling for up to a thousand dollars, and people replacing them more frequently. I notice some people have quite large collections of helmets. I do myself, but that's partly because I hate throwing things away, and there's not much market for 10 year old used helmets.

At various times there have been controversies about helmets causing deaths, that might have been avoided with no helmet.

I suspect that the helmet business would prefer to not be examined too closely, and as a result I think many journalists are intimidated away from the subject. The outspoken criticism comes mainly from people who don't want the helmets at all, not from people who question how well the helmets work.

In a perfect world, we would not need helmet laws, people would be smart enough to wear helmets almost all the time. And we would not be afraid of getting fined for not wearing our helmets while driving our motorcycle from the gas pumps to a parking spot at the service centre. Or riding at 10 kph through a campground to find our tent site. And in a perfect world, we could have frank and open discussions about how good helmets are, and whether they could be better. And no journalist would be fired for asking some questions about how they are tested.

Picture: From the South African website entry There is also a store bought helmet in the picture, strapped to the headlight.
Copyright the Lost Motorcyclist