The Gospel According to John is ... Different 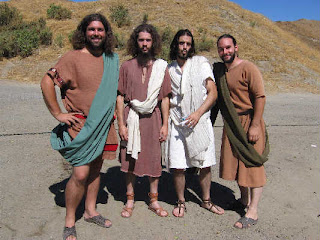 By I. Tawt Itawapuddytat February 2011.

Some Christians have been accused of forgetting that Jesus told us to "love our enemies", and twisting Jesus' words to make him into a warmonger. But that may not be exactly true, according to a book I just read. Apparently, the depiction of Jesus is not consistent throughout the bible.

I have just read a book called "Nailed", by David Fitzgerald. The main aim of the book is to simply prove Jesus never existed, but a part I found especially interesting was the comparison between the four gospels. David Fitzgerald says the Gospel of John is the one that describes the "Republican" Jesus. For the most part I agree.

The first three gospels are Mark, Matthew, and Luke. These are similar to each other, and so are called the synoptic gospels. But the book of John, the fourth and probably the last written, gives a different interpretation of Jesus.

John's gospel is the book that says you must be born again, and so I would suppose it is a favourite with Born Again Christians, who also tend to vote Republican. So there, Fitzgerald may be right.

In the synoptic Gospels, Jesus performs only two miracles, one is walking on water, and the other is feeding the masses with loaves and fishes. The book of John adds a lot more miracles, including turning water into wine, raising the dead, and faith healing.

However, the Gospel of John happens to include the only story of "Let he who is without sin cast the first stone". This teaching is strangely uncharacteristic of John's Jesus. It is also suspected that this passage was added at a later date, by another author.

John is also reputed to have written "Revelations" a book telling of the second coming of Jesus and predicting how the world is going to end in a major conflict. This violent book is also a favourite of Born Again Christians and Republicans.

The Gospel according to John left out many of the peaceful teachings of Jesus: the sermon on the mount, "Turn the other cheek", "Blessed are the meek" "love your enemy" etc. It is also missing the last supper, the birth in Bethlehem, and differs from the synoptics on the actual date of Jesus' death. (among many other differences)

The parable of the good Samaritan is only found in one Gospel, and if you guessed that it is not in John, you would be right. It's in The Gospel according to Mark. (In case you did not know, the good Samaritan is teaching the liberal view that some foreigners are better than some of your fellow countrymen.)

Who was John the Apostle anyway? Although John called himself Jesus' "Beloved" disciple, Jesus nicknamed John and James "Boanerges" or sons of thunder, according to their hot tempers. John was the only apostle to live to a natural death.  Apparently, the Roman emperor ordered John to be put in a vat of boiling oil, but John emerged unhurt. No wonder John believed in miracles.

1 Which book of the Bible says Jesus turned water into wine?

3 Jesus chasing the moneylenders out of the temple is often cited as proof God wants us to be violent. Here is the description from John and Matthew. Which is John's version?

A "And Jesus went into the temple of God, and cast out all them that sold and bought in the temple, and overthrew the tables of the moneychangers, and the seats of them that sold doves, And said unto them, It is written, My house shall be called the house of prayer; but ye have made it a den of thieves."

B "So he made a whip out of cords, and drove all from the temple area, both sheep and cattle; he scattered the coins of the money changers and overturned their tables."

4 Who said "And I saw heaven opened, and behold a white horse; and he that sat upon him was called Faithful and True, and in righteousness he doth judge and make war."

5 Who said "He that hath no sword, let him sell his garment, and buy one." (This quote is interpreted in the Bible Belt as a commandment to buy a gun.)

Answers 1. John 2. Ooops! That's Matthew. 3. A is Matthew, B is John, the clue is only John says he makes a whip 4 Revelation (also written by John according to some Bible scholars, so you get a point for saying John) 5 Another trick question, only Luke, not John (or Matthew or Mark) said to buy the sword.

Picture: Apostle John, second from the left here in this picture from about 43 AD. OK I didn't have a real picture of him, and you don't either. I got it from this website for the actor Cory Montgomery. http://www.corymontgomery.com/characters.htm
Copyright the Lost Motorcyclist