The Opposite of a Beginner's Motorcycle 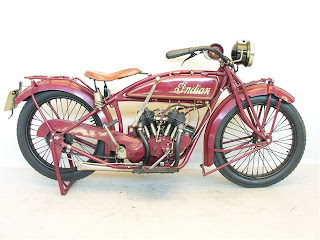 These are a few traditional requirements of a beginners bike.


So obviously, the opposite of a beginners bike might be


Let me give you an example of a bike that was both a beginners bike, and the opposite of a beginner's bike.

A man named Burt Munro bought a 1920 600cc Indian Scout with a top speed of 55 mph (89 kph). In the twenties, this might be considered a beginners' bike. Although I'm sure there were slower and smaller bikes available.

Burt must have felt the bike needed something extra, and in 1926 started making modifications. His modifications went on for many years, and in the final stages, he had turned it into a 950cc, terrifying motorcycle capable of 200 mph (320 kph). It was difficult, complicated and awkward to drive. It could only be properly tested at Bonneville or a similar track. If you count all the work done on it, in the end it would be worth well over $100,000. And would easily fetch more at a classic and historic bike auction.

There was also the movie about Burt Munro, who travelled from New Zealand to try his hand at an official record at Bonneville. The movie has the title "World's Fastest Indian".

While I'm on the subject of Bonneville here is a blog entry with some pictures. I was quite surprised reading it, that some Bonneville motorcycle racers are getting records with speeds in the 50 mph range. What? I'm pretty sure I don't need to travel to Bonneville to nail 50 mph with my Honda CD175. On the other hand, I guess if I want a world record I need all the documentation and race verification that goes along with a timed Bonneville run.

Now getting back to beginner bikes, the Cycle Canada issue for March 2011 seems to be promoting smaller bikes. The new Honda CBR250R is on the cover. One article is about the KTM 125, which is not available in Canada yet, but maybe a 250 version in a year or two? And one of the new contributors, Michael Uhlarik heaps a lot of high praise on the CBR250R.

"the CBR25R is not just a perfect machine, it is a perfect motorcycle."

These are not just empty words. Michael says he sold off his Yamaha FZ1 with 145 hp last year, keeping a 50 hp Laverda. And he takes time to explain his attitude towards the hyper power bikes.

"We are still out of control on the top end where $18,000 can buy a 180 hp missile."
"in mass produced bikes aimed at the general consumer, maximum power is irrelevant if it intimidates the user and contributes to their injury."

Kind of reminds me of Mike Duff, many years back writing in Cycyle Canada, criticizing street bikes with way more power than GP racing bikes of just a few years earlier. And as I recall he got a lot of flack for taking that position. But I agreed with Mike Duff then and I think Michael Uhlarik is an the right track now. The market, however, has gone the other way, catering even more to the maximum performance bikes, at the expense of the "beginner bikes." This has resulted in a collapse of the motorcycle market from the bottom up. What I mean is that there are few young riders, plenty of old riders, getting older all the time.

One answer to the collapsing market is small bikes that don't cost too much to insure. Insurance cost a big obstacle to people entering the bike market. Bikes around 250 cc are more reasonable to insure than 1000cc bikes. And this new Honda proves they can also be appealing. But we have to improve our appreciation of bikes of 150-450 cc, and we need to start buying them and riding them more.