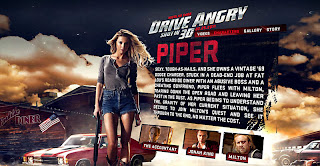 I was going to make the usual statement about spoilers, but this is a movie that simply cannot be spoiled. You know people are going to be shot, right? And there are going to be fast cars driven over the speed limit. In one of the most egregious speeding episodes, a speed limit sign of only 15 MPH is clearly visible, meaning there would be a very hefty fine for the speed they were driving (est. 150 mph)

Sometimes there is so much going on at the same time, you might miss some of it. For example, where Nicholas is shooting about 10 bad guys storming his motel room to death, and he is simultaneously making love to a hooker in 3D, you might not notice he is also chugging a bottle of Jack Daniels. I mean how is it possible to spoil a movie with scenes like that.

Normally I don't go out to such movies because Mary Ann dislikes them far more than she dislikes science fiction movies. But this afternoon I had a random blood test that told me I needed more exercise or I would be at high risk for diabetes, so I wanted to take a very long walk, much longer than Mary Ann could do. I decided to see a movie with my walk, and of course I would pick one that crammed in everything that Mary Ann does not like. To start with, it is R rated. It has guns, car chases, nudity, violence, and bad language. It has no socially redeeming features at all. Water is wasted, paper is not recycled, and I believe I even saw some styrofoam plates being used during the Infant Sacrifice scene. It would be impossible for Mary Ann to hate it any more even if it had also featured a cameo by Ben Stiller eating Chilean Sea Bass.

My only objection to the movie was the inference that Hell really existed. Five years ago I would not have cared at all, but that was before I discovered that so many religious people really believe in it. Although I don't like Satanic cults, I also don't like Christian fundamentalist cults, and even Muslim death cults. I guess I don't like any cults. The only way to tell that the cult featured in this movie was truly Satanic, was not so much that they sacrificed babies, but the way they sang a hymn in church. At first I thought they were deliberately singing it off key to avoid paying royalties to the songwriters, but then I realized there were no royalties on Christian hymns, it was sung off key to signify they were worshipping the devil.

If I had to describe the movie as a xxx meets yyy meets zzz, I would say Terminator I meets Dukes of Hazzard meets Macbeth. Instead of the General Lee (the Duke's car) they had a Dodge Charger. The Accountant (who was tracking down Nicholas) wanted to find out what kind of car Nick was driving.  I thought it was kind of strange that he asked what kind of engine it had, but not what colour it was, and I still can't figure out that one. Anyway, the Charger gets scrapped, and they find a Chevelle SS. That was the second thing in movie that I have a problem with. I just never did like the Chevelles. Couldn't they drive a nice little 1967 Toyota 2000GT like they did in James Bond "You Only Live Twice"? Of course not, as this movie was a celebration of good old fashioned American excess. Big cars, booze, guns, naked women, and religious cults.

I am going to award a special mention of thanks, in that no negative image of bikers were presented in this movie. The only biker I saw riding in the movie did not crash, which must be an all-time movie first. Especially so, in that some of the cars around him did crash.
Copyright the Lost Motorcyclist