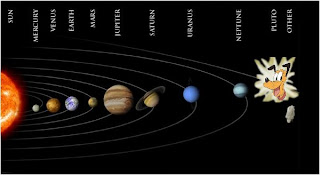 By: The Lost Motorcyclist, February, 2011

Science is not a natural way of thinking for humans. You would think the human mind would be able to grasp such an apparently simple concept as science. After all, how hard is it, really, to make judgments based on evidence, observation, logic and testing, with no human bias? When you consider the alternatives, it becomes a little bit more obvious why scientific thought remains an alien concept to the average human. Before science came along, decisions were made based on tradition, habit, superstition, conformity, and peer pressure. And most assuredly were influenced by prejudice and bias.

The Pluto controversy is a perfect example of scientific thought versus traditional thought. A scientist would look at Pluto, in light of all the recent discoveries of asteroids in our solar system, and make the scientific observation that Pluto was actually more like an asteroid than a planet. A scientist would say that, to be fair, either Pluto gets demoted to an asteroid, or we promote every similar object to planet status, and apparently there are a lot of similar objects to Pluto. To a person who can think scientifically, without bias, the answer is obvious. Pluto is not a planet.

But scientists don't think like humans. I asked Mary Ann how many planets there were. She said ten. What? She counted them off for me. "Men Very Early Made Jars Stand Up Nearly Perpendicular." I was floored, I never heard of those planets before. Then I started to recover. "That's only nine." She said "I heard they found another one a few years ago."

Mary Ann is not a scientific person. She does not like Star Trek. She does not like most science fiction. I'm guessing that most people who understand scientific reasoning would like science fiction. Mary Ann does not enjoy speculating as to what might happen in the future based on scientific discoveries that might be made one day. She is already suspicious of scientific discoveries we have right now. Cell phones, Facebook, 52" HD TV's, Surround sound, leaf blowers, and just about anything that can be found at Wal-Mart.

So I informed Mary Ann that there were eight planets, that Perpendicular had been demoted to an asteroid. She seemed resigned, but not terribly worried. Maybe she thought I was talking about a science fiction movie and none of this was real.

But other than Mary Ann, this demotion of Pluto caused considerable controversy, even within the scientific community. I was reading about it in "Unscientific America", a book by Chris Mooney and Sheril Kirshenbaum. This is taken from their book:

"even as scientists get up each morning and resume the task of remaking the world, the American public all too rarely follows along. This alienation leads to recurrent flare-ups like the Pluto episode, in which people suddenly catch wind of what scientists have been doing and react with anger, alarm, or worse."

Very few people think in a true scientific way. Most people's thought process is about the same as it has been since the beginning of the human species. We seek the "truth" and then we hang on to that "truth" no matter what. It is uncomfortable, even painful to have to change our "truths", when it turns out the truths do not hold up to further investigation. It is painful for humans to change their truths, and they will do anything to stop that pain. In the old days they used to lock up, stone, or burn scientists at the stake. Now we are apparently in a scientific age, we can't do that any more. But it does not mean people have to listen to the scientists. A modern alternative to burning at the stake is to look for selected scientists who have more comforting truths for us. Or to just not think about it at all, or react with anger when we are told that Pluto is no longer a planet.
Copyright the Lost Motorcyclist