Toyotas Are Not Death Traps 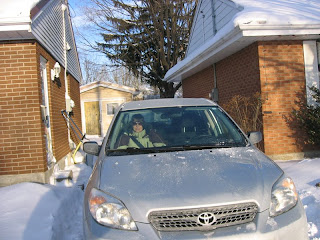 Still seems weird to me, a guy who drives a motorcycle having to explain why my Toyota is not a death trap.

With the debate still raging about Toyota's "sudden unintended acceleration", it seems to me that everybody is losing the perspective.

The story that keeps emerging is that Toyota was sitting on its hands doing nothing about sudden unintended acceleration, while all the other carmakers had already built in a brake pedal override, to prevent runaway full throttle acceleration. This is a very narrow point of view.

There is a far more serious problem with front wheel drive cars than SUA. It is losing control in a curve, and possibly sliding sideways and rolling over. I'm not saying this happens to everyone, but it happens much more than sudden unintended acceleration. It kills more people, and it is more difficult for even a fairly good driver to control.

Knowing that skidding in a curve was killing so many people, Toyota had made their goal to put stability control on every Toyota model. The Electronic Stability Control is much more difficult and expensive to make than the "Brake Override". And it would save hundreds of times more lives. This is where Toyota was going, and still is going, despite the billions of dollars lost with the SUA witch hunt in America.

But still, with all the Toyota bashing going on, you might think that Toyota was doing nothing to improve car safety.

Brake overrides are a useless feature for anyone who knows how to turn off a car engine, or put it in neutral, or use the brakes properly. But an Electronic Stability Control would actually save hundreds of lives. While it is easy to learn how to turn off the engine in an emergency (hold the button to a count of three, and you have maybe a minute to remember this and do it) it is actually quite difficult to control the rear end spin out on a front wheel drive car. (Accelerate and turn the steering wheel against the skid, and you have .5 seconds reaction time to do this or you are too late).

The fact is that although it is very cheap to put in a brake override, unfortunately it involved adding lines of code to the acceleration system. Which in turn makes sudden unintended acceleration, or maybe some other fault, more likely. One way Toyota has made its cars reliable over the years by trying to stay a bit back from cutting edge technology. Reliability is not glamorous, but many older customers like it.

When Toyota does innovate, they try to make it worth while, like making the car safer in rollovers or skids. They were on the right track, and I hope all this hysteria does not deter them from being the standard that other car makers must live up to. Because we all benefited from that.

Audi found a way twenty years ago to mostly prevent drivers from using the wrong pedal. They put in a lockout that prevented the driver from selecting any gear unless their foot was on the brake. That put a stop to Audi SUA problems. According to Wikipedia, on Automatic Transmission,

"In many modern cars and trucks, the driver must have the foot brake applied before the transmission can be taken out of park."

Of course that is only a front line defence, and can be defeated by a determined person by putting their foot on the accelerator when the selector is in "Drive", and then forgetting that they moved their foot from the brake to the accelerator, and then the accident is waiting to happen. I don't know if all Toyota have this brake lockout feature, but with many times more cars than Audi, they will still have some problems with extremely forgetful drivers.

How to put a Toyota Highlander in "Drive" from eHow.com

http://www.ehow.com/how_7213720_put-toyota-highlander-drive.html
Picture: Our Matrix heading out of town with the snow cleared off the windshield first.
Copyright the Lost Motorcyclist