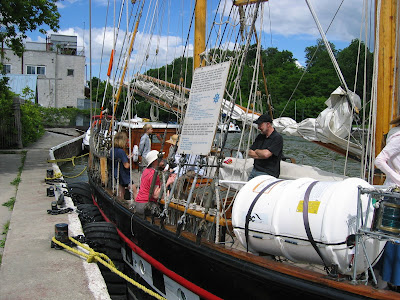 I finally got to the Fritter Place in Port Dover for my first half dozen fresh apple fritters of the year. Mary Ann didn't come because I was stopping a couple of times on the way to Port Dover, first for a motorcycle gang meeting at Tim Horton's and next to take a peek at the last day of the Paris Vintage Motorcycle Rally, 2010. Neither of those interest her.

We all showed up at Tim Horton's on time as usual. We are a punctual gang, if nothing else. The main item on the agenda today was verbally bashing Bob's Intruder 1400. As we were getting into it, a Harley rider parked next to us and remarked that we seemed to be picking on Bob, and one of our members (The V.P in Charge of Motorcycle Judging) took the time to point out that our actual favourite object of verbal bashing was the 150 cc Kymco scooter, but that we have grown bored with 6 weeks of steady abuse of the scooter.

After the meeting adjourned, I headed for the Paris rally, but there were only three tents left and they were all being taken down. So I took the opportunity of riding my motorcycle through the show grounds, in order to introduce my Kawasaki Vulcan to the tire tracks of legendary motorcycles such as the Rudge, as featured on the T-shirt commemorating the 38th Annual Paris National Rally of 2010, and the 100th anniversary of Rudge. Check out the top photo on this page of my motorcycle website, with my mother and all her brothers and sisters in 1939 with both my uncles on Rudge motorcycles. (Click it to enlarge)

A quick lap of the rally site, and back on the road this time to Port Dover. Because of the nice Sunday weather it was packed with beachgoers and motorcyclists. I parked my bike near Tim Horton's along with maybe fifty other bikes, and walked over to the Fritter Place. This year the Fritter people are only going to open three days a week in the summer, and they have a new cashier to help out, and a bigger machine for peeling the apples. After looking at this machine in operation, I asked exactly how new is this machine, and I don't remember the exact date, but it was a four digit number and the first two were 18. I commented that Tim Horton's apple fritters were probably being made on a much more modern machine, but then realized that the apples in Tim Horton's "apple fritters" would not need to be peeled, as they were mostly imaginary apples. (That is not a type of apple, it is when you think there is an apple but there is no apple)

Tied up at the dock near the door of the Fritter Place was the "St. Lawrence II", a training ship with square sails. Beautiful to look at. Scary to change the sails.

So to summarize the ingredients of a perfect day: A motorcycle club meeting where my motorcycle is not on the agenda, a ride across the field of motorcycle dreams, a new Rudge T-shirt, a half dozen real apple fritters (I only ate three, three for Mary Ann), a square sailed tall masted ship, 25 degrees C and sunny weather.

Picture: The Dock in Pt Dover, I took this picture today at 3:00 PM.
Copyright the Lost Motorcyclist